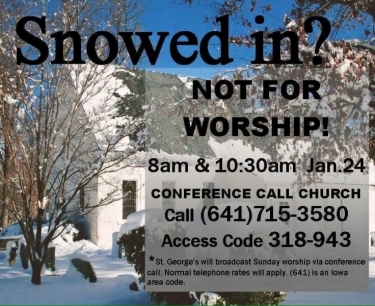 Two weeks ago, in advance of winter storm Jonas, the forecasters in the mid-Atlantic began their steady drumbeat of winter weather analysis mixed with heart-stopping projections.

Meteorologically, they knew something was going to happen but, whatever it was, it wasn’t going to happen until Friday of that week; I’m sure they said as much in their ‘round the clock reporting. In the minds of area residents, however, the psychological situation had already begun to shift.

I became aware of this on Tuesday when, for instance, the altar guild reported that they were going to set up for Sunday worship on Wednesday afternoon and then hunker down in their warm homes and see me the following week. Or maybe sometime after Groundhog Day!

I’m not one to freak out about weather, so I went on about my week, even popping into the local grocery store on Wednesday afternoon to pick up some supplies for bible study. There, I noticed the meat counter was nearly empty and long lines poured out of every available register. I don’t know much about weather, in general, but I do know how to read a community! And that’s when I knew that no matter how many inches of snow landed on the ground, Sunday morning church was in serious jeopardy of happening.

And that’s also when I remembered a friend talking about doing what she called “conference call church.” On bad weather weekends, or at random points throughout the week, she’d set up a conference call, using one of the many free online conference call services. She’d let folks know the phone number and access code and then wait on the other end with Morning Prayer and sermon on the ready.

Luckily, I had some time to really organize this and push it out. I took a picture of our church from one of the past snow storms, and put text over it: “Snowed in? Not for worship!” On that image, I posted the phone number and access code I got through a free conference call services, and pushed out the image via Facebook, our newsletter, our website and, a day later, a Facebook event. Pulling together the readings for Sunday and the online Book of Common Prayer, I assembled a comprehensive Morning Prayer order of worship, saved a PDF version, and posted that, too, to the website and Facebook page.

The snow began to fall, as predicted, early Friday afternoon, and by Saturday morning it was clear that this was a big one. By this time, I had already gone to Radio Shack and bought a headset with microphone – making me look just like your friendly telemarketer or drive-thru clerk – and the technology worked perfectly in a test run when I plugged it into the phone in our sacristy. Looking back, I probably didn’t need to trudge over to the church building, itself, on Sunday morning – no one else showed up – but if I didn’t my Chicago friends and family probably would’ve used it as yet one more indication of how wimpy we are when it comes to snow. True, we’re not as accustomed to snow in the mid-Atlantic as are other regions in our country, but I don’t ever remember getting these huge, one-time veritable dumpings of snow in the upper Midwest.

In all, between our 8:00 o’clock and 10:30 am worship services, 35 people joined in worship, hearing scripture, praying our lives, and listening to a sermon – for many, while they were sitting in their comfortable, warm homes while drinking coffee or eating breakfast. This isn’t even close to the numbers we normally worship with on Sundays, but worship went on. Conference Call Worship has become, for us, a nice fall-back option. At the very least, we won’t ever say we’ll “cancel” worship on a Sunday morning. The church goes on, even if it’s on the other end of your phone.


Don't miss a blog post! Subscribe via email or RSS, using the grey box on the upper right.