Marketing the "E" in Episcopal Schools (Lessons for Churches...) 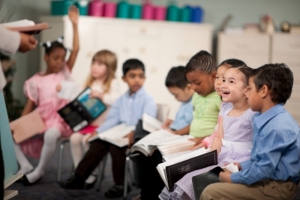 Most schools take great care in how they articulate their educational philosophy and program. Yet many overlook the same when it comes to Episcopal identity. In our experience here at NAES, schools that are clear and forthright about their Episcopal identity thrive because they attract parents, students, faculty, and staff who become deeply committed to the school in its fullest expression. For these schools, their Episcopal identity distinguishes them from other educational options, supports the recruitment of “mission consistent” families, and links the school’s value directly to its core values as an Episcopal school.

Here are six strategies that Episcopal schools of all kinds can use to develop honest, clear and direct ways to communicate what the “E” means at their school.

Name it and claim it.

“Episcopal identity” varies greatly from school-to-school based on the school’s history, traditions, geographical location, liturgical style, and socio-religious context. Regardless of these differences, however, every Episcopal school has both visible symbols and cultural norms that embody its Episcopal identity. Naming and claiming these in ways that the entire community can understand, articulate, and celebrate is perhaps the first and most important “marketing tool” for any Episcopal school.

Current families, faculty members, students, and alumni who speak with passion about the school out of personal experience and link their experiences to its Episcopal character are our first and best ambassadors. Ideally, all of the adults in the school community understand what makes the school Episcopal, not simply the chaplain, head of school, or admissions staff. In elementary, middle, and secondary schools, students should be able to name particular values, qualities, or practices that embody the school’s Episcopal mission and character.

“Naming and claiming” what makes our school distinctively an Episcopal school, however, can be challenging. But it is possible!

These are just a few examples of ways schools articulate directly what it means for them to be an Episcopal school.

The website is the first place parents, students, and others go to learn about any school. How and where is your school’s Episcopal identity presented on the school website? Is it front-and-center, buried in a hard-to-fund sub-section, or completely missing? Are chapel and worship presented, as well as service and service learning, religious studies, and other programs that raise up the school’s Episcopal ethos, culture, and mission?

Pictures are worth a thousand words. Photos and photo galleries, videos, Facebook feeds, and news stories are all places where the school’s Episcopal identity can and should be highlighted and celebrated: chapel and worship, service and service learning, curricula that are grounded in being an Episcopal school, and student and alumni profiles.

Episcopal schools shape lives in powerful ways. Every Episcopal school has families, students, and alumni who have stories about pastoral care provided in a time of difficulty or crisis, a passion developed for social justice, being spiritually fed and cared for, or coming to understand their place in the world and a higher purpose in life. These stories speak volumes about what it means to be an Episcopal school. Capturing and sharing these can illustrate the school’s impact in tangible and very human ways.

Talk about it, regularly.

Integrate your talking points into admissions tours, open houses, student and faculty interviews, faculty meetings, and parent information sessions. The school’s “Episcopal story” should be told over and over again, from the first point of contact with a prospective student or family through graduation and beyond. In this way, everyone associated with the school develops a shared understanding of what the school stands for as an Episcopal school. The chaplain or rector can talk about what this means at faculty meetings, new parent gatherings, and curriculum nights. Faculty meetings or professional development days can be devoted periodically to exploring and discussing the school’s Episcopal identity. For instance, Campbell Hall (Episcopal) in California has developed a series of faculty workshops on Episcopal identity. (And, they will be offering a session at Biennial Conference 2016 on these workshops.)

It’s equally important to address directly any common misconceptions about the school. Some schools may need to emphasize that the school is an inclusive and religiously diverse community that welcomes all. Others may need to articulate a particular Christian identity. Whatever the case, tackling misconceptions head-on opens up dialogue and clarifies who the school is—and is not. Canterbury School in North Carolina uses an "FAQ" format to address common questions.

It is only natural that that people come to our schools with all kinds of questions about how we “do” religion and what that means for their child or children. By inviting questions and being both open and forthright, we can help others to better understand the totality of who we are and what we value. Having the chaplain available during admissions open houses, recruiting parents ambassadors of various religious backgrounds to answer questions, inviting prospective students and families to attend chapel—these are only a few ways that schools model the hospitality that is a hallmark of The Episcopal Church.

Before we can "market” our school’s Episcopal identity (or any other aspect of the school), we need to be clear about what it is and live it authentically. There is a version of the popular "Keep Calm" meme that reads, "Keep Calm and Stop Mumbling." Perhaps this is the first and best piece of advice when it comes to articulating and advancing the "E" in our school's mission, identity, and daily life.

This article is based on the National Association of Episcopal School's (NAES) April 2016 webinar "Marketing Your School's Episcopal Identity" which NAES members may view in the NAES webinar recordings archive. It is reprinted with permission. It was published as part of NAES' May 2016 member newsletter and is reposted here with permission of NAES.