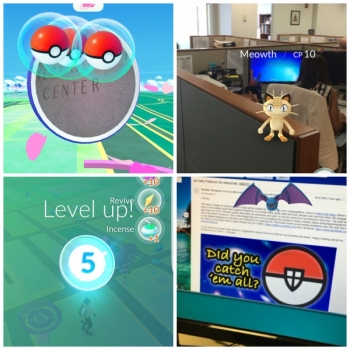 This past week you may have noticed herds of people wandering around neighborhoods, staring at their phones, and searching for something. Those somethings were Pokémon, and those people were trying to catch them in the mobile game Pokémon Go.

You can physically see the way Pokémon Go, barely a week old, is affecting the real world. Players are searching for, among other things, “gyms,” the game’s focal point for between-player competition. There’s a “gym” near me that is simply a tree in a park with no real benches or meeting spaces. Still, on a Sunday afternoon a dozen teenagers were there, at the tree, hanging out and defending the gym.

But what does this have to do with church?

Anecdotal reports from the game’s first week indicate that many of the game’s items are turning up in or near churches. Sanctuaries have unsuspectingly been tabbed as “gyms” or Pokémarts (where players buy virtual items for use in the game). In my neighborhood, it seems more than half of the landmarks in Pokémon Go are churches.

It’s not hard to imagine that well-meaning clergy and laity sitting in a church office might take a tone-deaf approach to a casual visit of a Pokémon Trainer (the name given to real-life players). That’s a wholly unimaginative and inhospitable way to treat our new Poké-visitors.

Or try something like the Crystal Bridges Museum of American Art in Bentonville, Arkansas. When they discovered that Pokémon and PokeStops were scattered across their grounds, they got creative and took pictures of the critters next to various displays and pieces of art, then blogged about it on their site. What if a church blogged about Pokémon spotted in their youth room, sanctuary, or sacristy?

Pokémon Go has become a cultural phenomenon that has caught countless churches up in its momentum. Just today I met a young man at our parish sign as he was looking for PokéBalls. Innovative and creative thinking can help parishes make the most of this unforeseen opportunity, using our sanctuaries as places for evangelism and meeting our neighbors…and catching Pikachu.