Be Prepared; Save a Life 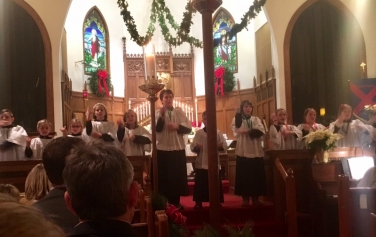 At least it did in our congregation on Christmas Eve.

If you read only one blog, read this. If you’re going to follow the advice of only one best-practices column, let it be this one.

Like most churches on Christmas Eve, our pews were full, a lovely mixture of parishioners, extended family, and visitors. The children’s choir leads the 5 p.m. Christmas Eve service, so they were vested in white albs, shiny church shoes and cuffed slacks peeking below the hems. The sermon was compelling with lots of audience interaction, especially from the young choir members who sat in the choir loft, next to the organ and near the piano.

Poinsettias dressed the altar, and candles flickered, casting a gentle filter. It was the long-expected Christmas Eve service, familiar and lovely and heartwarming.

As the priest and lay leaders straightened the altar table after Holy Eucharist, the pianist struck the first notes of “Away in a Manger.” On Sunday mornings, Dale is the musician for another congregation, but occasionally we get lucky and he plays for us. (And we have an in: His wife is our organist and his daughter, the music director).

The phrase “tickles the ivories” was coined for pianists like Dale. I leaned forward into the pew and whispered to a friend: “I love when he plays the piano. The music transports me.” She nodded, and I settled back, smiling, losing myself to the music.

Then Dale struck a wrong note. And another one. For a second, there was no sound. Then thump. Dale slid onto the keys of the piano.

The next seconds were a slow-motion blur. The husband of the woman in front of me held Dale’s head, opening the airway. A retired orthopedic surgeon, one of the ushers, ran the scene. Another doctor, fresh from passing his boards, worked with a second nurse to administer CPR.

No pulse. No respiration.
Start compressions.

Char came down the aisle with the congregation’s AED – Automated External Defibrillator. It normally sits on a shelf in the narthex.

Please God, our priest prayed. Let the AED be fully charged. Then he remembered that Char, a nurse who oversees our parish health ministry, checks the defibrillator regularly. It would work.
A teacher calmly asked the children of the choir to come with her to the choir room and invited other children from the congregation to leave as well. The older acolytes helped escort children, carrying toddlers and holding hands.

Our music director and organist held onto each other. Dad, it’s going to be ok. Dad, we love you. The parishioners readied the AED machine, placing the pads on his chest and following the verbal instructions.

No pulse. No respiration.
Stand clear. Prepare for a shock.

Dale’s chest lifted from the ground.

Faint sirens from an ambulance sounded. About two-thirds of the congregation still sat quietly in the pews, some praying. Others holding hands.

The service is over. Please move into the undercroft or to your cars. In shock themselves but calm and collected and prayerful, people departed. We moved the baptismal font and flowers from the aisle, creating a clear path for the emergency crew. As they arrived, Dale started to stir. His heart was beating again.

The EMTs asked what had happened and were notably impressed. You all did a great job. Really. You did everything right.

As they started to cut off Dale’s sports coat and insert an IV, Dale murmured, “Don’t do that. I have two more services to play tonight.”

Within minutes, the ambulance was transporting him to the cardiac unit of the hospital. Family members were taking his wife and daughter. The priest followed them to the hospital. Ushers extinguished the candles and cleaned and straightened the pews, readying the church for the next worship service. We called two of the adult choir members: one who occasionally substitutes for the organist and another who used to direct a high school choir. They both gladly, faithfully, stepped in for the midnight service.

It was not the Christmas Eve service we had planned. But neither did Mary expect to deliver the son of God in a manger. On that night when we recalled the glorious miracle of the birth of Christ, we experienced in a palpable way the thin space between heaven and earth. But Dale’s resuscitation, while a thing of joy and thanksgiving, wasn’t a miracle. It was because the congregation was ready. We are blessed with amazing medical personnel who handled the situation well, but even if they had not been there, the defibrillator was. It’s designed so that nearly anyone can use it, talking you through each step, analyzing and monitoring the patient. The defibrillator shocked his heart back into rhythm. The manual CPR had kept oxygen flowing, but there was still no pulse. Without the AED, I don’t know what would have happened.

I’m not sure when the church bought the AED machine. It probably has sat on a shelf for many years, never before used. I wonder if anyone grumbled when the purchase was made. With a starting cost of around $1,200, I can imagine some people thinking it was a waste of money—or at least that in these times of tight budgets, the money could be better spent on a more immediate, certain need. But I feel like crafting a script for one of those credit card commercials: automated defibrillator: $1,200. Saving a life: priceless.

Today, only eleven days later, Dale is at home, recovering from triple-bypass surgery. His wife jokes that she might have to put a leash on him; he’s not good at sitting around.

The tips of the poinsettia leaves are starting to curl, but the sanctuary is still dressed for Christmas. After all, Epiphany is tomorrow.

The AED machine is back on the shelf of the narthex. A routine check by the company is scheduled.

We hope we never have to use it again. But if we do, we’ll be ready.

Note: The American Red Cross estimates that access and improved training for AEDs could save 50,000 lives each year. According to the Red Cross, an AED is the only effective treatment for restoring a regular heart rhythm during sudden cardiac arrest and is an easy-to-operate tool for someone with no medical background.

Time is of the essence:
The average response time for first responders once 911 is called is 8-12 minutes.
For each minute defibrillation is delayed, the chance of survival is reduced approximately 10%.
Learn more about Automated External Defibrillators, including how to purchase one, at the American Red Cross.