The River is Moving 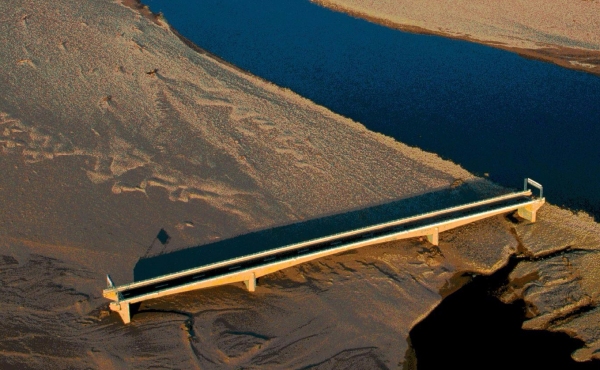 For the second time in just over a year, my work has focused on hurricanes. Last year it was helping my parish and the city of Houston navigate life during and after Hurricane Harvey. Earlier this month it was waiting and preparing for Hurricane Florence.

Needless to say, storms and flood waters have consumed much of my thinking.

Maybe that’s why I’m so struck by the picture at the top of this post. Something’s wrong there. Who would build a bridge in the wrong place?

As it turns out, there’s more to the story, obviously. That’s the Choluteca Bridge in Honduras. It was built in 1998, and it was state-of-the-art. But just months after the bridge opened, Hurricane Mitch formed in the Caribbean.

The storm stalled over much of Honduras, dropping historic amounts of rain, and all that water had to go somewhere. The water came rushing down out of the mountains and into the Choluteca River Valley, with such force that it literally changed the course of the river.

So in a matter of days, a brand new bridge became obsolete. When officials realized what happened to the river and bridge, Honduran President Carlos Flores said, “We lost in 72 hours what we have taken more than 50 years to build, bit by bit.”

That bridge was built to do exactly what it was supposed to do...but the river moved.

The tragedy in that whole story lies in the nature of rivers. Rivers move, because rivers are full of rushing water.

Rivers do that. Rivers are alive.

As is the case with any successful institution, the church as we know it today was built with the best social and religious engineering available: as a robust and hardy structure to last. A lot of time, energy, sweat, and money has been invested. Generations of investment. And it served as a bridge for many to move from birth to death. It spanned the river.

And that all worked very well when the river was in the right place.

Our culture is in a huge moment of change. The result is that what used to be true about the world has jumped the old banks where the church had constructed itself. All these societal changes have been well-described in other places, and I don’t need to go into that here.

Those are all great things. Tradition helps ground us. Prayer Books help guide us. But are there instances where those things...those bridges of things...hold us back from what God is calling us to do when the river moves?

We are called to always respond to the ever-changing ways God is working within and around us. So that leaves us with our task: To be the people of God through whom the grace of God is experienced by others in real life, wherever the river flows.

And that is all the more important now that the river has moved. Or, rather, as we realize that the river is ALWAYS moving. Because God is already out ahead of us making all things new...and we just have to be ready to join in that work.

Where have you seen a change in your community, and how have you tried to engage?