The Creed: Profession of Faith, Love Song and Prayer 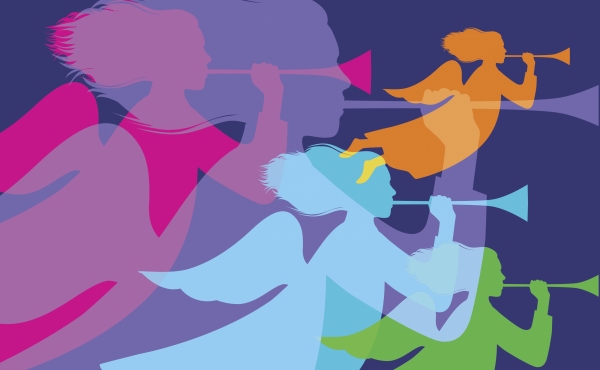 My grandfather’s bedtime prayer was the Apostles’ Creed. Knowing that it held this special place in the heart of the man who held a special place in mine made me pay close attention to the words, regardless of the setting, throughout my life. I grew up in the Presbyterian Church, and the Apostles Creed was part of our weekly worship. Nonetheless, for me it was always a love-laced prayer.

Years later, now an Episcopal priest, I am often aware of a contrasting experience of the Creed in liturgy. First, it is the Nicene Creed rather than the Apostles. I know the Apostles Creed is the creed of baptism, and therefore more personal, and the Nicene Creed is more corporate, the “faith of the Church”, meant to be said by the whole congregation. It’s not a prayer.

Liturgically, The Nicene Creed follows the sermon (and sometimes serves as a corrective to the sermon!). It usually begins without introduction, beyond, in some places, an invitation to stand. It is a proclamation, declared with boldness by those gathered, kind of like a pledge of allegiance. This is what we believe!

And while it can be somewhat energizing to join the throng in reciting the text, I confess, it sometimes feels more like the church triumphant, “the conquering ranks combined”, a bit overbearing even. It can foster an us versus them mentality. Which perhaps is what we want, some boundaries, some definition of who we are. Not to be too corny, but…. I do wonder how Jesus would feel, standing in the sixth pew on the right of the aisle in that moment.

It can feel daunting to the uninitiated, too. It leaves little wiggle room for those who are unsure whether their faith lines up with the text, or not. Some stand but don’t join in. Others are sure to be silent on those parts of the Creed that reflect a belief they don’t share.

If liturgy forms us, I wonder what is means for us to declare our faith in this way. What is its liturgical role? If it is formation in the faith, is there a more effective way for it to be used? Though not a prayer, could it be, perhaps, more love-laced?

An alternative is to chant the Creed together. With a simple tune, sung a cappella, the Creed takes on a very different tone. The words are the same, but the experience is different. As with all a cappella singing, those gathered experience a spiritual, rather than cerebral oneness. They are present to one another and to God. Through harmonies and melodies, there is a sense of the Holy Spirit moving within and among those gathered. Singing, especially chanting, breaks down a temptation to aggressively draw a line in the sand. The experience becomes more prayerful, too. It becomes a thing of beauty.

In the Eucharistic Prayer, the Sanctus is introduced with an expression that we are about to join our voices with “angels and archangels and all the company of heaven”. I wonder what difference it might make if we offered a similar introduction ahead of the Creed, in print or aloud from the Celebrant: “Joining with Christians throughout the centuries and throughout the world today, let us affirm the faith of the Church, chanting the Nicene Creed.”

As such, the liturgy might better express what we believe and form us in our faith, a faith shared, a faith rooted in love, expressed in love. We believe in one God, Jesus Christ, the Holy Spirit. We look for the resurrection of the dead and the life of the world to come. It’s beautiful, really.

We believe in one God,
The Father, the Almighty,
Maker of heaven and earth,
Of all that is, seen and unseen.

We believe in one Lord, Jesus Christ,
The only Son of God,
Eternally begotten of the Father,
God from God, Light from Light,

True God from true God,
Begotten, not made,
Of one Being with the Father.
Through him all things were made.

For us and for our salvation
He came down from heaven:
By the power of the Holy Spirit
He became incarnate from the Virgin Mary,
And was made man.

For our sake he was crucified under Pontius Pilate;
He suffered death and was buried.
On the third day he rose again
In accordance with the Scriptures;

He ascended into heaven
And is seated at the right hand of the Father.
He will come again in glory to judge the living and the dead,
And his kingdom will have no end.

We believe in one holy catholic and apostolic Church.
We acknowledge one baptism for the forgiveness of sins.
We look for the resurrection of the dead,
and the life of the world to come. Amen.