John: The Gospel of Glory and…. 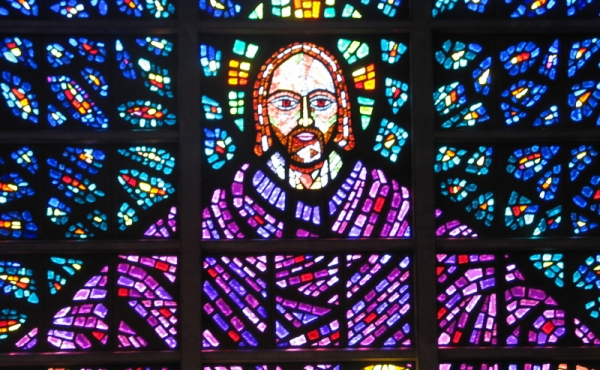 As a new Episcopal Anglican in my early 20s, I consumed all I could find of the writings and interviews of Michael Ramsay, the 100[1] Archbishop of Canterbury. He was my ecclesiastical and theological hero.

In a late 1970s filmed conversation with then SMU Episcopal chaplain William Millsaps, Ramsay leans in and declares: "John is the Gospel of glory". This conclusion is not unique to Ramsay, of course, but it was his demeaner and accent, and my admiration of him, that brought the phrase home to me. And I quickly determined that John was my favorite Gospel of all.

In the ensuing years, through eight lectionary cycles, seminary and early priesthood, I savored John’s perspective. In him we are given the mystery and the big picture. Jesus is the man of teachings, healings, and norms-busting, yes. And he is also the Word, the Christ, present at the beginning, the one through whom all things came to be. John also gives us the promise of Jesus that there is more to be revealed. ‘I still have many things to say to you, but you cannot bear them now. When the Spirit of truth comes, he will guide you into all the truth.”

This is all thrilling, really.

Then in 2004, I found myself Vicar of The Church of the Advocate in the Episcopal Diocese of North Carolina, worshipping in a synagogue. We had been launched a year earlier and needed to rent a space on Sunday evenings for our liturgy, fellowship and Christian education. The Chapel Hill Kehillah (Hebrew for community), a reconstructionist synagogue, opened its doors to us. On the Second Sunday of Easter, 2005, I stood in the midst of the Advocate congregation, gathered in a synagogue, to read the Gospel from John.

“When it was evening on that day, the first day of the week, and the doors of the house where the disciples had met were locked for fear of the Jews….”

It simply didn’t feel right. And certainly not like Good News.

Only then did I begin to explore the anti-Jewish bias of my beloved Gospel of John. Through the years, I had heard it was there, but I didn’t want to acknowledge it. “The Jews” are represented as a solid block, never favorably, and always in opposition to the Christians.

I also started to connect the dots from John’s Gospel to the centuries of anti-Semitism among Christians that followed. A shameful line.

Following the guidance of some, I turned the phrase “the Jews” in my own thinking to “the religious leaders.” This went a long way to challenge me to be mindful of my own accountability to the Body of Christ. And I joined the ongoing conversation about how we might teach about John, and the Good Friday readings in particular, with sensitivity and insight to this problem.

Part of that teaching includes an awareness of the very human nature of John and of the Christians of his day and of his community. None of us lives in a vacuum, even the apostolic church. And while there are many aspects of the life of faith and doubt that are repeated from one generation to another, each generation has its own setting, its own temptations, its own sin, its own faithfulness. The Gospel of John provides a fabulous entry into conversations about the blind spots and temptations of our own time and place. Perhaps this is some of the “further revelation” by the Spirit that Jesus promises us in this complex Gospel.

Every one of us, and all of us together, reveal the Glory of God and…. other things not so glorious.