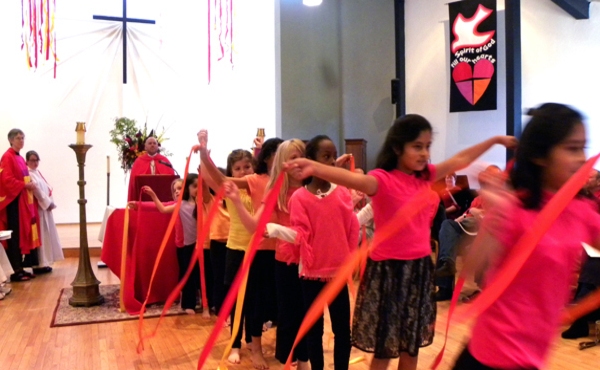 I know the day of Pentecost is past but for some reason it has stuck with me this year. Today I noticed something about it. If you are a fan of the original Star Trek series you probably remember than when the crew set off on a mission away from their comfort zone (an away mission) you could tell which crew members were likely to be killed --- they were wearing red shirts!

I love the image that the original Pentecost was when the disciples were ordered by their captain to leave their comfort zone. Like those crew members, when we put on the red for Pentecost, we have reason to be concerned. Most of the red-shirted crew died on away missions. Scripture tells us we are to die (to self) in God’s mission.

Think about that phrase “to lose something for the good of other people.” For the good of other people – not something which will seem to be good for us, at least not on the surface. Wouldn’t all those crew members have preferred to successfully complete the mission, and then return to the ship unharmed? Wouldn’t we prefer to do God’s mission without any anguish or even discomfort? Wouldn’t it be nice if we could end the day having spent our energy on hobbies rather than Habitat? Spent our money on trinkets rather than a food pantry? Spent our time on TV re-runs rather than standing for racial justice?

Allow me to add the one that makes most Episcopalians extremely uncomfortable: Wouldn’t it be nice if we could continue to have safe, comfortable, meaningless conversations rather than risky ones when we speak about God? (Note: One of my least concerns is Episcopalians becoming too pushy!)

We need to step out of our protected, comfort zones into the unknown. That is the mission God has sent us on, to the ends of the earth. Jesus was insulted. Peter was insulted. Paul was insulted. But are we too important to take a chance on being disliked?

Question for reflection: Name 3 things you have done this Easter that might qualify as an ‘away mission’.

This year the phrase “the season after Pentecost” makes a lot more sense. We are standing on the transporter pad with clear instructions – will we say “energize” and get started?

(Sorry if I just ruined Star Trek for you!)