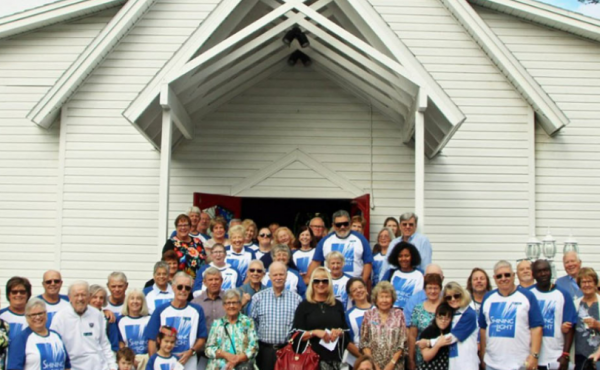 The importance of legacy is firmly rooted in the minds and hearts of the parishioners of All Saints Episcopal Church in Tarpon Springs, FL. I interviewed The Reverend Janet Tunnell, the rector, James Rissler, chair of the Funding our Future committee, and Ellen Lightner, chair of the Perpetual Light Legacy Society, to learn how creating a legacy society helped and is continuing to help All Saints grow the church’s endowment for the future.

Founded in 1892, All Saints Episcopal Church is in sunny Tarpon Springs, Florida, a historical fishing village on the Gulf Coast. Generations of families have attended the church, yet it’s also a welcoming place for newcomers. “We are just a very close tight-knit family. When you come the first time you're embraced and welcomed, and you feel like you've been there forever.” Ellen Lightner said.

Like many churches, All Saints had many conversations about how to secure the future of the church. The church started an endowment in 2003, and the fund now equals more than $500,000. The vestry has overall responsibility for the endowment but set up a committee, Funding our Future, to manage and grow the endowment. The Funding our Future committee is made up primarily of past church leaders whose familiarity with both the endowment and the church could help with long-range planning.

The All Saints endowment includes two funds – one designated for general operating expenses and the other for youth programs and scholarships. Any surplus from the general operating fund is earmarked for special maintenance of All Saints’ nearly 130-year-old facility.

For many years, the vestry wanted to create a legacy society to encourage new gifts, donations, and bequests and to honor the donors, but their efforts were met with starts and stops. The turning point came with the decision to turn over the management of All Saints' endowment to the Diocese of Southwest Florida’s Diocesan Endowment Management Program, which invests with the Episcopal Church Foundation. James Rissler, chair of the Funding our Future committee said, “When we turned our funds over to the diocese for management that freed up a lot of our time that we had previously used to manage the fund. We started looking for new things and new opportunities to help. We started talking about all the different things we could be doing and starting a legacy society became a subject.” The request to form a legacy Society came from the Funding our Future committee and the vestry okayed it.

At All Saints’ annual meeting a few people on the committee and other volunteers gave testimonies about what their long-term commitment meant to them and to their families. Ellen Lightner shared, “I talked about my grandparents who were members of the church back in the 1950s, and how my parents and those people of that generation thought ahead for the legacy of the church today. All those things that they put their money into we now enjoy and giving to the legacy society will preserve that legacy for our children, and our grandchildren, and the people that will be at All Saints when we're gone.”

After the annual meeting, the legacy society committee followed up with postcards to remind the congregation about the deadline to become founding members.

In February, during the Lenten period, All Saints did a four-night workshop series, borrowed from a neighboring Episcopal church, called “Navigating Our Future.” The first workshop focused on living arrangements as you age and learning about the resident services of a nearby retirement and nursing home. The second workshop was about planning for aging as it relates to legal matters. They invited a lawyer to come in and speak about creating a will. The third workshop was on healthcare and life maintenance as you age. They had a financial advisor come in regarding end-of-life planning or finances. And the fourth workshop focused on funeral planning. A local funeral director and Rev. Janet spoke on the different aspects of funeral planning.

James Rissler, “One of the key things behind the whole effort with the legacy society was to encourage people first to make out a will and then, secondly, to ask them if it is possible to put the church in their will. Reverend Janet is available to help people with their planning which includes funeral planning as well as including the church family in their will.”

Ellen Lightner, “In the beginning, we literally took the printed outline on starting a Legacy Society and went step by step with the outline. It was very helpful, and it was very good to know why you needed a year to plan.”

Rev. Janet, “The experts of ECF have been incredibly helpful. It was beneficial to have the information in Funding Future Ministry, to see the options laid out and learn how to speak about planned giving in a heartfelt way instead of speaking just about the nuts and bolts.”

Endowment Management Associate Program Director, Josh Anderson, has worked closely with both All Saints Episcopal Church and the Diocese of Southwest Florida’s Diocesan Endowment Management Program on various endowment management issues including growing endowments through planned giving. Jim Rissler, “ECF has been helpful in establishing our legacy society through phone calls and referrals. Our diocese has had programs that our members have attended, and they have given out information provided by ECF. We also attend Diocese of Southwest Florida’s annual meetings in February where Josh has given presentations."

As a result of seeing Josh’s presentation on marketing a planned giving program, All Saints’ Funding our Future committee redefined its purpose. They incorporated all their operational and funding needs into a well-defined purpose.

Rev. Janet, “I think one of the things that I appreciate about ECF is the scriptural connection to what we're doing here. It is important to remind people of why we are called to be good stewards in this way.”

What are All Saints’ goals for the future of their legacy society? They are planning to have annual events for members of the Perpetual Light Legacy Society and give quarterly updates on the growth and use of endowment funds. Ellen Lightner, “Originally, when we started the legacy society, it was sort of the mindset of 'let's get people to sign us up in their will.' But now it’s expanded into 'let’s get people to understand that the perpetuity of the church is based on their commitment to keeping the church going after they're gone.'”

For example, Rev. Janet explains, “when they turn 82, they put $82 into the endowment. That can build up over time. And once they hit a thousand dollars, they are now a legacy member.”

“You have to look down the road 40, 50 years from now. If nothing else, sure, you don't want to see the old church go, but it’s more than just the building. The church is the people,” Ellen said.

Take your time
Rev. Janet, “Having a timeline was really important in setting the pace. Knowing that we could take our time and plan for the whole year was instrumental in realizing that we're not just going to announce it and then, in two months, gain numbers. That founding year was most important.”

Lean into the power of your testimony
Committee members from the Legacy Society gave their testimonies and perspectives about why giving to the endowment was important.

Seek out help
The Episcopal Church Foundation has resources that were pivotal pieces in the success of All Saints’ legacy society. ECF’s Endowment Management program has the expertise to help churches structure, invest, and grow their endowments and resources such as Funding Future Ministry, can help Episcopal organizations create robust endowment giving programs.

Start where you are.
Ellen Lightner, “For any church thinking of starting an endowment it doesn't matter what size they are, they should just start putting money in the endowment. That's what we did and eventually, our endowment got large enough that we needed a better plan. Just start, don’t worry how much they’re able to put in there. Just do it, just start!"