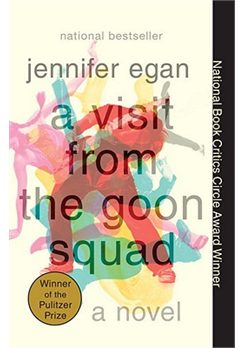 Summer is novel reading time. Trapped by the heat, I try to stay as still as possible, book in-hand, under a tree or nestled up to my AC wall unit. Two weeks ago I survived one of New York’s hottest days by reading Jennifer Egan’s A Visit from the Goon Squad.

Oddly enough, I found myself thinking a lot about the Episcopal Church while reading this novel. To me, it’s a book about finding (and losing) one’s self and sense of purpose amidst the astonishing changes of the digital age.

The last chapter, in particular, has led me to think about what sort of role and witness the church might have in the very near future. In it, Egan portrays the world just 15 years down the road, at a point in time in which the social media revolution we’re currently experiencing has permanently changed how we relate to one another.


For instance, we say the hard things through texts: “Nvr met my dad. Dyd b4 I ws brn.” Then there is the chilling conversation about marketing to “pointers” - that is, children too young to speak who purchase music by “pointing” on their mobile handsets. “Now that Starfish, or kiddie handsets, were ubiquitous, any child who could point was able to download music - the youngest buyer on record being a three-month old in Atlanta...”

Finally, Egan draws out some of the moral implications of what we are already experiencing in Facebook as major corporations harness the power of social media to create “authentic” word of mouth marketing for their products. In one of the best scenes in the book, the protagonist uses an app to search for discreet Word of Mouth marketers from among his 15,896 “friends”. He inputs three variables: how much they need money, their influence/reach, and their openness to corruptibility. “What he needed was to find fifty more people like him, people who had stopped being themselves without realizing it.”

In this world - namely, ours - the desire for authenticity takes center stage. Amidst attempts to replace authenticity with its branded look-alike, there’s an intensified longing for the voices of outsiders, songwriters who exist at the margins. In this case, it’s the hurt-filled songs of a janitor who catches fish in New York City’s East River, but I can’t help but wonder whether the church, with our own outsider who catches fish, has something to say and teach in terms of authenticity.

Jennifer Egan’s novel imagines a world jaded by social media, a world characterized by both an ironic cynicism and longing for authenticity. In this imaginary world, words like “friend” and “real” and “change” and “democracy” will only be used ironically and will only be printed when encased in quotation marks. Having turned the last page, I found myself wondering where the church was in all of this, trying to remember the last time I heard a provocative sermon on what constitutes real friendship, real change, real democracy. If Egan’s imagined future is even partially true, there will be an increased need for leadership in these areas.
Subscribe via EMAIL or RSS
Twitter Facebook Link
Subscribe