Who Should be at the Table? 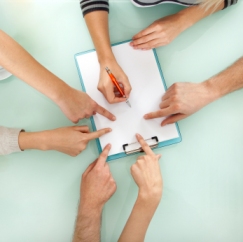 There are many tables within an Episcopal Church. There is, of course, the altar. This table is at the center of our liturgical life and serves as a reminder of the table around which Jesus and his disciples shared a final meal.

But in most churches there are other tables too. For instance, there’s oftentimes at least one large meeting table around which key decisions about the life of the congregation are made. Who should be present there?

In every church there are major decisions that require input from the wider congregation. Those who help to facilitate these major decisions will have to make hard decisions about who should be present at those meetings and who shouldn’t. This can be a fraught task. We all know of instances where people have been hurt and projects have been derailed because no one thought to get input from a key stakeholder.

Who needs to be at the table?

While there’s no hard and fast rule for this sort of decision, collaborative leaders keep key stakeholders in mind. Generally speaking, the following categories of people need to be brought into the decision-making process in some form or fashion, whether through in-person meetings, surveys, or other feedback mechanisms.*

The person responsible for making the final decision
While this may seem obvious at first, many decision making processes have been upended by lack of clarity around who is the ultimate decider. Task force leaders and committee chairs will want to clarify from the outset whether they are ultimately responsible for the final decision or whether they are only responsible for facilitating the deliberation process on another’s behalf. There’s a crucial distinction between the two. When you fall into the latter category, you will want to maintain strong ties of communication with ‘the decider’ throughout the process, bringing them into key meetings and through regular check-ins along the way.

Those who will implement/prevent implementation of the final decision
During a leadership training I attended last year, a young woman working for a small nonprofit shared the story of a rebranding process that went awry. Her nonprofit’s logo was admittedly terrible and so a special committee was convened to come up with a new design. At the first meeting, the development director said that he didn’t have the time to be involved in the process and that whatever design the committee decided upon would be fine. Except, of course, it wasn’t. When the committee’s work was complete, the development director realized that he couldn’t accept the final design. He ultimately made a very convincing case to the Executive Director which resulted in the design being nixed. The process began again; this time with the development director seated at the table.

Those who will be directly affected by the outcome of the decision
While it’s rarely possible to set up in-person meetings with everyone who will be effected by the outcome of a decision, it’s important to create opportunities for input and feedback from those who will live with the results of the decision every day. The most obvious example that comes to mind is the renovation of worship space. For ECF’s capital campaign clients, we advise that there be multiple opportunities for congregants to look at designs, offer feedback, and voice concerns.

Has information or expertise
One of the most wonderful parts of being a member of a congregation is discovering the hidden expertise of fellow parishioners. Oftentimes, individuals will feel called to step up and offer their expertise when the congregation is facing a difficult decision. Are there experts in your congregation whose gifts could contribute to the decision-making process? Are there outside experts who need to be brought in?

* This list is adapted from Interaction Associates’ training curriculum “Facilitative Leadership: Tapping the Power of Participation”