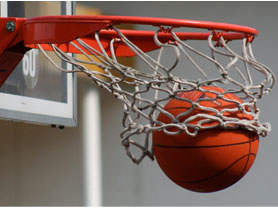 If you want to know how much food it takes to feed two hungry college basketball teams for nearly three weeks, just ask the people of St. Timothy’s, Iola. They can tell you, because that’s what they did in early January for the men’s and women’s teams at Allen Community College.

Sue O’Connor, who is co-chair of the parish’s Outreach Committee, said they were approached by the men’s coach when he found out that the dormitory cafeteria wouldn’t be open during the time players would be on campus for games and practices.

He knew to ask the church because in recent years members have provided some meals for the college’s cross country team when they are in town for early conditioning drills before the start of fall classes.

But O’Connor said that experience hardly prepared the church of 31 members for the challenge of feeding so many meals to 50 athletes.

Nightly dinners called for at least six 9-by-13-inch pans of casseroles, in addition to vegetables, fruit, rolls and dessert. When they served ham, it took 40 pounds. For spaghetti night, it took six pounds of pasta and 10 loaves of garlic bread. Mashed potatoes? They had to peel about 30 pounds of raw spuds per meal.

O’Connor said a dozen church members were part of the project, with two people taking responsibility for all the lunches of sandwiches, fruit, chips, granola bars and cookies. Members donated desserts for every dinner and homemade cookies for every lunch, she said.

Even after the athletes had eaten their fill, O’Connor said they always provided take-out containers so leftovers could go back with them to the dorm.

She said, “Having raised six kids, I knew no one was done eating for the day at 6 p.m.”

‘These people are eaters’

The Rev. Jan Chubb, the parish’s vicar, said she was happy to help, because she knew first-hand how important good food is to an athlete. “I’m from a basketball family,” she said, “and these people are eaters.”

O’Connor said Chubb and member Lois Burris gave the kitchen crew a big break when they each provided the large main dish for two dinners.

Chubb said many of the players aren’t from Kansas, having been recruited from inner-city areas for their basketball skills. That means they weren’t used to — or sometimes even familiar with — the hearty, home-cooked meals they found when they came to the parish hall to eat.

“They didn’t know what pork loin was, and some had never seen turkey and dressing,” Chubb said. “Many of them come from areas known as food deserts, places without full grocery stores.”
O’Connor said that lack of familiarity didn’t slow down their appetites, though. “Once they tasted it, they always took extras,” she said.

O’Connor said the basketball coach told her she had $2,500 to spend on ingredients for the meals, and they spent about $1,760. Only later did she learn that the amount he’d mentioned was the food budget for both teams for the entire season and was expected to cover meals when they were on the road, too. The coaches were very grateful to have money left over, she said.
She said spending that amount to produce 40 meals for 50 people over 20 days was only possible because of the donation of so many items from members, plus some ingenuity on the part of the cooks.

Leftover ham became the base for Italian ham spaghetti, and extra hamburger from taco night was turned into Sloppy Joes. “We stretched every dime as far as we could,” she said.
The players chipped in to help, too, she said, taking care of meal clean up every evening and carrying out the trash. They were quick with thank-you hugs, too, and O’Connor said by the end of their three weeks together, “We were all so sad that it was drawing to a close.”

The athletes’ help extended outside meal times, too. The men’s and women’s teams both helped with one week of the church’s commitment to BackSnacks, a program that provides a weekend’s-worth of healthy snacks in backpacks to at-risk elementary students. The men’s team unpacked the truck of supplies, O’Connor said, and the women’s team made quick work of placing items into the backpacks.

O’Connor said church members truly enjoyed getting to know the players, making sure they always sat down to share each meal with them. The team has been quick to provide the church with free tickets, and she said several parishioners have taken them up on that offer. Two new church members who were regular cooks go to as many games as they can, she said,
But O’Connor said that developing relationships with these young athletes, many far from home, was what made the effort truly worthwhile. “Hugs were the greatest payment,” she said, “and learning so much about these kids was our biggest benefit.”


Melodie Woerman is director of communications for the Episcopal Diocese of Kansas. This story first appeared in The Harvest, the diocese’s bimonthly newspaper, which she edits. It is reprinted with permission.