Jesus is the Reason for this Season, Too 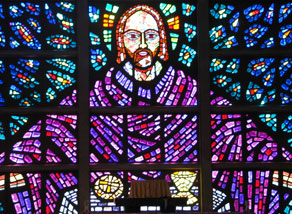 The return of school and these post-Labor Day days seem to have kicked the whole world – and no less the church – back into program mode. Bible studies and Sunday schools and small groups and senior ministries and other programs are in full swing, or at least they’re getting there. That’s a great thing. But why are we doing this, anyway?

The other day, I was talking with a friend. “I’ve got to tell you something,” she said, “I’ve been going to another church!” I heard genuine excitement in her voice. And I also heard a little anxiety. Previously, she and her family had been active in their local Episcopal church. She first found her way into that congregation through their passion for social justice and the food pantry they run in their economically mixed neighborhood. My friend, you see, has a real passion for justice and even though she was raised in a nominally Christian household, she was never drawn to God or organized religion in her 20s. Volunteering with the food pantry, however, led her to eventually make connections with and ground her life in the worship and fellowship of that congregation. In time, her children were baptized at that parish church.

“It’s a new start-up church,” she said, describing what sounded to me like an attractive, hip, urban, warehouse-style evangelical community that features praise-and-worship style music in a pretty chill and contemporary atmosphere. She described how much she looks forward to worshiping on Sundays and that she’s excited about the bible study she’s recently joined and how much her husband and children are also enjoying becoming a part of that community.

“I didn’t think this would ever be a church I’d be a part of,” my friend said, “and yet it feeds me and I find myself wanting to keep coming back.”

She had begun to worship less and less frequently at her Episcopal church, she said, primarily because she felt over-worked and not without stress when she’d leave on Sunday mornings. “Nickle-and-dimed for various causes,” she said at one point. “A never-ending ‘capital campaign’ just to fix the leaks in the building we have,” she mentioned later. The list went on.

I asked if she thought it was a generational thing, that our parents threw themselves into volunteer activities and we, in our generation, tend to get burned out more easily. “No, it’s not that so much,” she said. “It’s that Jesus was never really mentioned in the food pantry or at committee meetings. Only on Sunday mornings in church. It was never really tied together about God and us and Christ.”

It was a profound and powerful conversation with one of my good friends, and someone, in general, who I think is an amazingly capable and gifted person. I was on my way back to my church office. I was killing time, or so I thought, talking with a friend on a long drive back to the parish hall – the space where I was going to put the finishing touches on a few more programs we were set to launch this fall.

And that’s when Jesus showed up and taught me a lesson, too. Jesus has a way of showing up on the roadside, just when you’re on the way from where you were to the place where you’re going to do what you know you’re supposed to be doing. Jesus has that way of interrupting and, sometimes, stopping what you previously would’ve called ‘forward progress.’ He has a way of reminding all of us that He is the very reason for every season, this one, too, and if He’s not in it we might as well set it down.

Something to think about....

As you look at and think about all that your church offers, is Jesus visible and present? How do you know? What tools do we have at our disposal to help us with this discernment?