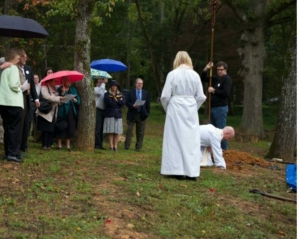 Last Sunday morning, the congregation of The Advocate gathered to say goodbye to one of our own. We commended him to God’s loving hands, and committed his ashes to the ground in the churchyard. It was our primary liturgy of the day.

While baptisms take place in the context of principal liturgies more often than not, and weddings occasionally do, Sunday morning funerals are rare. There are good reasons. A funeral is usually a gathering of those who knew the deceased, who want to express condolences to the family, or to show their respect for the one who died. If the funeral is on a Sunday morning, not everyone gathered will have that intent; the liturgy may feel unwelcoming. Newcomers and visitors could feel left out of the congregation’s corporate grief. Parents might be challenged to know what to say to their children. In short, hospitality can be compromised.

A Sunday funeral could establish an unwanted precedent. Others may want their own funeral, or that of their beloved, on a Sunday morning as well. That could get out of hand fast. There could soon be more Sundays with funerals than Sundays without. We might then have to designate funeral Sundays, the way we designate certain Sundays as more appropriate for baptism. With cremation gaining traction in the society around us, it could certainly be possible. But it would be weird.

The main reason, perhaps, to avoid Sunday morning funerals, is that funerals can be a downer. For the most part, people don’t go to church on Sunday morning to see a box containing the remains of someone we knew or did not know perched before the altar. It is one thing to be reminded of Jesus’ death, quite another to have to think about our own.

All of these are reasonable objections to a Sunday morning funeral. But there are times when it is just the right thing to do.

When the person who has died was part of the very fabric of the church community, being together in shared grief and loss strengthens that community. When the congregation works and dwells in far off corners of nearby counties during the week, Sunday is the time when most can be together. When the person who died was a steady presence on Sunday mornings, one with whom the congregation shared the Eucharistic Feast season by season, Sunday morning is a prime time and place from which to send that person on with song and prayer to the heavenly banquet that awaits us all. When the person who died was once an essential thread in the fabric of the church, but then became increasingly isolated by a decade or more of sickness, dementia, or inactivity, a Sunday morning funeral can be a profound way to celebrate the communion of saints. All who gather, young and old, can learn about their collective past as a church, can give witness to the way in which we all stand on the shoulders of those who went before. We can give witness to the Body of Christ transcending time and place.

Homiletics professors are quick to point out the evangelical opportunity provided by weddings, baptisms, and funerals. These are the times when we are most likely to have people in the congregation who would not otherwise be in church. When we gathered for David’s funeral last Sunday, most of his friends and family who joined us did not have a church of their own; they had not been a part of a church for decades, if ever. What they discovered was community of people who were loving, forgiving, hospitable, and spirited. They were surprised, gladdened, and comforted. A Sunday morning funeral reveals a church that is authentic and vibrant. One could say, the church at its best.

There is, no doubt, a certain awkwardness about it. But if we can set aside that awkwardness for a moment, this funeral-in-the-midst-of-the-principal-gathering-of-the-church idea is actually pretty seamless. Because Sunday is the day when we who are the Body of Christ, the Church, gather together to re-member Jesus, the One who is the Way of God, and who shows us the Way to God. Sunday is the day when we re-member the One who also died and then somehow overcame that death.

And in that “somehow” that we call the resurrection, death isn’t the final end-of-it-all denouement that it would otherwise be. Put succinctly, in the words of the ancient Easter hymn which we chanted at the end of David’s funeral:

Christ is risen from the dead,
trampling down death by death,
and upon those in the tombs,
bestowing life.

Christian faith holds that this life that is given to us by the resurrection of Jesus gives us hope. Hope for the end of our earthly pilgrimage, yes, but also hope that we can be liberated. Liberated from the evils great and small that entomb us in the meanwhile. Hardness of heart, substance abuse, envy, fear.

All of these things and more.

A funeral can be a profound expression of what we believe and what we hope. It can form or reinforce that hope where it may have grown thin. Not only does the Sunday morning context strengthen the experience of the funeral, then, but the funeral can strengthen the experience of Sunday morning as well. As one participant in David’s funeral expressed, “Honestly, in the context of a Burial Rite, everything is placed in a whole different relief, and you hear those prayers we say every week in a completely different way.”

Our Sunday morning funeral last week revealed God, the risen Christ, and the Church to his family and friends. Individually, those who gathered together were given a palpable experience of Christian hope. Significantly, the funeral strengthened us as a faith community. When we processed into the churchyard to inter David’s ashes, there was misty rain in the air. The crucifer observed: “It was a beautiful service. And the spitting rain was reminding us all of our baptisms the whole time. God was participating in that liturgy as well, I think.”