Strategic Thinking: How our biases impact our parish’s decisions 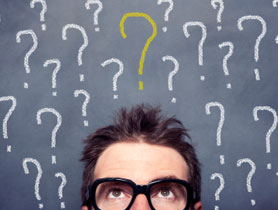 Years ago, I was in a freshman at a Midwest liberal arts college. I took a required course for graduation called “Bible and Culture.” Rick McPeak, the professor, had three rules. The third rule, the one that captured this Episcopalian’s attention, was to commit to transcending my personal biases.

At the time, I was 17 and unaware I could hold biases much less rise to transcend them. A required reading, which supported the class rules, was F. Scott Peck’s The Road Less Travelled. Peck noted in this formational book, “Human beings are poor examiners, subject to superstition, bias, prejudice and a profound tendency to see what they want to see than what is there.”

Years later, I’m still committed to working on it. Lately, I see the leaders of our Episcopal Churches and ministries living in to this same difficult work.
Do any of these sound familiar? Encountered at your most recent vestry or leadership meeting?
Harvard Business Review recently published a fascinating article entitled, “Leaders as Decision Architects” by John Beshears and Francesca Gino. In it the authors note:

What kinds of bias do we run into as decision makers in our parishes? These authors name a surprising good number. A few include:

Loss Aversion: We feel losses more acutely than gains of the same amount, which makes us more risk averse than a rational calculation would recommend

Example: A parish had an opportunity to adopt a position on a social or political issue. A few parishioners noted they didn`t share the same opinion. Rather than adopt the position or even create a listening process for all parishioners, leaders decided to keep the status quo to not risk losing members. Ironically, the parish could have grown with new members if position had been adopted.

Sunk-Cost Fallacy: We pay attention to historical costs that are not recoverable when considering future courses of action.

Example: A parish, when considering whether to move forward with a capital campaign, which is highly supported, suffers collective anxiety from a previous campaign that was not successful.

Escalation of Commitment: We invest additional resources in an apparently losing proposition because of the effort, money, and time already invested.

Example: A parish had a yearly fundraiser, which cost the parish hours of volunteers’ time with little money raised. A vestry chose to keep the fundraiser, despite the inefficiency, because a beloved member had years ago devoted herself to it.


How do we start the process of transcending our bias?

It begins by naming one exists and articulating at how it impacts our decisions. Through truth telling and examining our presuppositions, we begin stop seeing our options limited to “What should we do” based on limited information. Instead we begin to say “What is possible?”