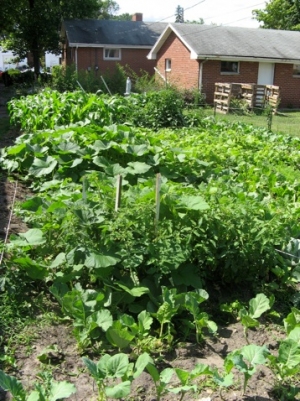 This is the second of a 3-part series about the relationship ministry of Holy Trinity Episcopal Church in South Bend, Indiana. Read part 1 here.

In 2011, in the midst of “mayhem” in inner city South Bend, Indiana, Holy Trinity Episcopal Church hosted a community meeting. Rather than retreating into the fortress of the church in the wake of violence, the people of Holy Trinity invited neighbors to join with them in activism, calling on authorities to pay attention, and calling on each other to live in peace. It was the planting of a Kingdom seed.

In the four years since that time, Holy Trinity has continued planting seeds, and now celebrates how the seeds, and the congregation, are firmly rooted.

Through open listening sessions, the people of Holy Trinity learned that what neighbors wanted most was relationship – to be in community with the church. Current priest-in-charge, Mother Terri Bays, says the process helped the congregation “become more attuned to the blessings of the neighborhood.”

This mutual respect is reflected in Holy Trinity’s responses to ministry opportunities. For instance, Mother Terri explains: “We had children wandering into church during services. They gobbled up snacks. We talked about that. One man said, ‘I just want to make them some soup.’ But none of us wanted a ‘soup kitchen.’

Rather, Holy Trinity began hosting community suppers – not for their neighbors, but for members of the church and neighbors, so everyone could sit and talk with each other.

“Our ministry is to walk with our neighbors and to notice the work of God already going on in their lives,” explains Mother Terri. “It’s not just us who are holy. Part of our job is to help people recognize their own gifts.”

Walking with neighbors is quite literal for Holy Trinity. On Rogation Days, instead of praying for the work inside the church, Holy Trinity processes down sidewalks, stopping to pray for people who work in the neighborhood. Mother Terri explains the church asked store owners in advance for permission to come on their property and pray. She then wrote special prayers for each place.
“We started with our own community garden, then the convenience store across the street, then we kept going. Along the route was a business that washing cars out front, but was suspected of selling drugs out back. We noticed a group of people sitting out in front of the business, and they were watching us. We went into a gas station where people thanked us for our prayers, and we kept walking. Suddenly one of the people from the group watching us came running up to us. I left the front of the procession and circled back to meet him. As the man approached he asked, ‘Are you praying only for the good people? Aren’t we good enough?’’

Mother Terri showed him a bulletin which stated that yes, the car wash was on the list of stops. The procession would be heading back that way after they prayed at the Fire Station. Unexpectedly, the man joined them in prayer for the fire fighters. When the procession got back to the car wash, all those sitting in front stood up and prayed.

Holy Trinity’s willingness to be in relationship WITH people rather than just doing FOR people has resulted in many similar stories. There’s the alcoholic living in an unheated garage who came to ask for a Bible and now attends services. There are pre-teen girls who came into weekday services on their own and have come back occasionally with their parents on Sundays.

Mother Terri describes the congregation of Holy Trinity as tiny, sometimes tired, and without much money, but also “mighty in spirit with a heart for the Gospel of Jesus Christ.” As they see the harvest of the seeds they plant, members are examining their own personal responses to God’s abundance. More about that next time. Until then, here are some questions to reflect upon in the light of Holy Trinity’s experience.

• Does your church consider outreach ministry to be what is done FOR others? What might your congregation do WITH others, and how might that change your relationship with them?

• How has your church provided you with a special sense of belonging, meaning, and purpose? Do your ministries to neighbors provide the same for them?

• Describe a time when your congregation shared Jesus with neighbors. What made that possible?