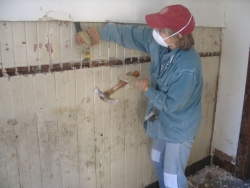 I lost it when I pulled the Buzz Lightyear doll out of the boy’s closet. Until then, I’d been okay. Even after discovering what at first appeared to be flocked wallpaper was instead, an eerily beautiful pattern of black mold. And, after the discovery of a black snake, hidden deep in the overstuffed closet in the next room.

It’s January 2007. I’m with my colleagues from Episcopal Divinity School, inside a 3-bedroom home in East New Orleans. Earlier that week we’d helped gut other homes, in other neighborhoods, but this was our first experience working in a home seemingly untouched since the family fled the rising flood waters 15 months before. Clothing was hanging in the closets and folded into drawers. Toiletries littered the bathroom counters. Kitchen cabinets were stocked with food. Everything was damp and moldy and at the same time a powerful reminder of the family whose lives were forever changed by the power of wind and water.

Since that first trip, I’ve been back to New Orleans and the Gulf Coast many times. Once on another work trip, installing sheet rock in stripped-to-the studs homes, a hopeful step on the path to bringing families home. More often to visit family who call the Gulf Coast home: family members who lost homes or jobs to Katrina. Over the years we’ve seen the progress: schools, churches, homes, and businesses being rebuilt. And, as we noted during our most recent visit this past spring, too many empty lots remain, many with faded For Sale signs; ever present reminders of the destructive power of wind and water.

For those who live in other parts of the country, the 10th anniversary of Katrina brought the images of the devastation and destruction back into our collective consciousness. In a recent blog post, Katie Mears, director of Episcopal Relief & Development’s US disaster program, makes this observation:

“Ten years after Katrina, I think there can be a tendency to turn these anniversaries into simply celebrations of our good work. It’s true that meeting the people I met in New Orleans in the years after the storm changed my life and, in many ways, changed our church for the good. We did good work. But I cringe at the idea that Katrina ten years later is that saccharine – that it’s told as a nice transformation story for me, the white Northern volunteer who made a career out of the suffering in the storm’s wake. Katrina’s anniversary should be a commemoration of the nearly 2,000 people killed and a call to action to prevent the systemic failures that led to their deaths. We need to hold on to both the loss and the moments of grace. ”

As people of faith, how do we both hold on to “the loss and the moments of grace” and at the same time, look deep into our own hearts and ask what we, acting on Jesus’ command to 'go out,' can do to bring about the systematic change needed to make our communities, our country, and our world, a safer and more just place for everyone. I know there is more I can do; remembering to make it a priority is the challenge. What about you? Are you acting on Jesus' command to 'go out?"