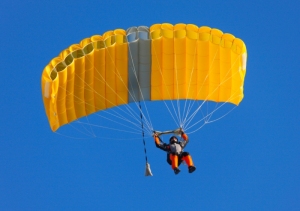 What an image: A parachute dropping from the sky towards a new suburb still growing into farmland on the northwest side of Indianapolis. Who is this parachutist so intentionally aiming for this community? It’s a priest!

Okay, Gray did not actually jump out of an airplane. “Parachute drop” is a term used by church planters to describe the start of a congregation in a new place without many connections… literally dropping in from seemingly out of nowhere, and following the lead of the Holy Spirit.

Gray dropped in to Brownsburg’s Starbucks, with the blessing and financial support of the Episcopal Diocese of Indianapolis and churches across the diocese. He chatted with fellow coffee and tea drinkers, to learn more about the community. He explains he began making connections with particular focus “on those who are spiritual seekers, people who have not yet connected, people who are exploring.”

It was something he always wanted to do. He was attracted to Brownsburg because of its recent population boom. With plentiful land, great schools and moderately priced housing, the area’s cornfields seemed to blossom into subdivisions overnight. This affordability means plenty of diversity among the newcomers.

“Episcopalians do diversity well. We embrace it. I saw a tremendous opportunity to build a church around the diversity,” Gray explains.

Gray’s training in church planting taught him to find existing networks to connect with people. From his “office” at Starbucks, he started asking baristas and customers, “Who is in the margins of this town?” He learned about a local high alternative school that is geared to help students with a variety of challenges, special needs, and differing abilities.

Gray visited Harris Academy, and asked the principal how his still-in-formation band of congregants might be able to support the school. Surprised, the principal said, “I’ve never had a church ask to serve our students.” And he opened the doors to Good Samaritan.

“We don't preach or offer services for the students, but we became a PTA for the school in the absence of one among its students' parents. We volunteer for the school clean-up day, we provide graduation presents,” Gray explains. “We are making inroads and connections to students and their teachers. We have attracted others who want to serve the school.”

Good Samaritan’s name is no accident. The congregation values being a church that serves. In fact, every time the congregation gathers, there is worship and service.

For instance, there is a food pantry at Harris Academy, operated by 11th and 12th graders in special needs classes to help them acquire job skills. When summer came, the church took over stocking the pantry while the students were on their summer break. In June, July and August, on Wednesday evenings, “We came together, unloaded pallets, then celebrated Eucharist,” Gray explains.

In March, there were 0 people worshipping and serving with Gray. Now there are approximately 70! They meet once a month for worship and service, and more often for formation. The largest group formation occurs via pub theology. Folks gather in pubs once or twice a month. Basic spiritual questions are asked, allowing people to reflect as Episcopal principles are explained.

The people of Good Samaritan are not initially aiming at building a building. While the Diocese of Indianapolis owns eight acres of land in Brownsburg, the focus right now is on building a community, not an edifice.

“Many people today say they are terrified to come into a church or a Sunday School classroom. Our buildings can limit our ministry. We (Good Samaritan) lowers the threshold by meeting in a safe, public place. It’s Pub theology versus Catechumenate in the undercroft – much more inviting to those who are seeking but not quite up to walking into a church,” says Gray.

Gray asserts that Good Samaritan is just one model of a church plant. He believes the church
“needs this kind of complimentary spectrum of ministry.” He also encourages congregations who are considering sponsoring a church plant by saying, “Don’t let fear prevent you from doing something, or think that ‘until we can get it perfected, we should not act.’ Be a bit of a risk taker.” 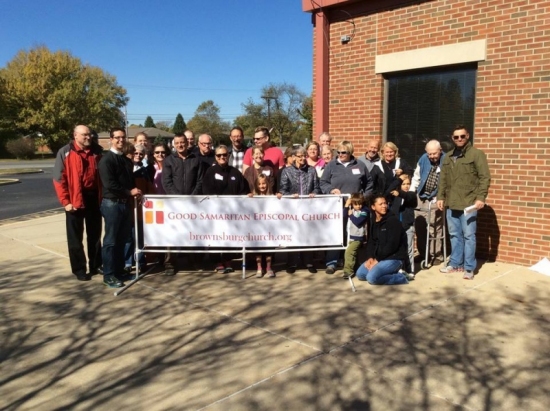