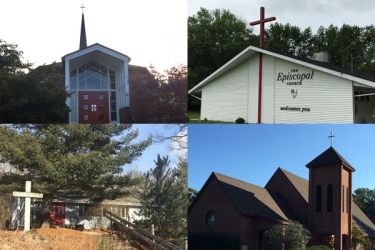 The far corner of northwest Indiana is a collection of cities and towns at the edge of greater Chicago. Through decades of multiplying suburban communities, Episcopal parishes were established throughout this region. As steel mills closed in a changing economy, many congregations wondered, and still wonder, how long they can sustain their ministries.

In 2010, three such parishes found themselves about to be without rectors due to one priest retiring and two being called to other churches. Bishop of Northern Indiana Edward S. Little invited the congregations into “dialogue and discernment” about their future since none of the churches was likely capable of affording its own priest.

“After much discussion and numerous meetings, a new vision began to emerge: one church in three locations. This is not a merging or yoking of parishes, this is a new way in our times of being Church. This vision is very much like the early Church that we hear about in the Acts of the Apostles and Paul's Letters. Each town may have had several house Churches but together they formed one Church in various locations.” - From www.calumetepiscopal.org

The “one church in three locations” became the Calumet Episcopal Ministry Partnership (CEMP). Later, a fourth congregation joined the partnership, so it now includes St. Barnabas in Gary, St. Paul in Munster, St. Timothy’s in Griffith, and St. Christopher’s in Crown Point.

Rev. Michael Dwyer is CEMP’s full-time priest-in-charge. Rev. Michelle Walker serves as a part-time Assistant. Other priests are paid to supply as needed.

Fr. Mike characterizes CEMP as a family of grown children.

“Like adult siblings, we each have our own house [church buildings], our own income [pledges], and we make our own decisions [with vestries],” explains Father Mike. “We do many things separately [usual Sunday morning worship, Bible studies, etc.] and sometimes we do things together.”

For instance, in months with five Sundays, the congregations take turns hosting one service for all. They did the same for the observances of Holy Week. Easter was celebrated at each location.

Each church pays a monthly allotment into a budget from which priests are paid, and printing and supplies are purchased. For the first two years of CEMP’s existence, the diocese provided a grant to help with finances, but Fr. Mike says now the partnership is solvent and self-sufficient.

Fr. Mike was ordained a priest as CEMP was created. Attending four vestry meetings a month and four annual meetings might give pause to even the most seasoned rector, but God had prepared Fr. Mike for the challenge. A management career in health care finance and information technology taught him how to simultaneously deal with multiple priorities and entities.

Fr. Mike has a go-to prayer whenever he takes on trying to solve all of the issues that four congregations can generate: “Not me, Lord, but You through me.” He says it reminds him “not to let my ego get in the way of what God wants done.”

Steady leadership, a sense of humor and a strong awareness of the Holy Spirit are also trademarks of the “father figure” of the CEMP family.

The CEMP ministry model is an alternative that is working for four churches in the same geographic region. No… Make that ONE church, with four locations.