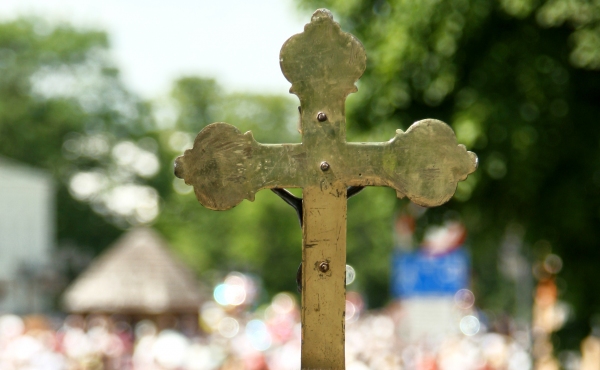 Maybe it comes with the job. I couldn’t help but notice the ways people prayed at both political conventions. There was a good deal of what I call horizontal praying going on. What do I mean by horizontal praying? Though the message is bracketed with a “Dear God” and an “Amen,” it’s really meant to make a point with those hearing the prayer, for example, the prayer at the dinner table: “Dear God, help my sibling, spouse, parent, child to stop being such a jerk. Amen.”

In the past two weeks at the conventions, I heard some beautiful prayers. I also heard some prayers I thought were really political speeches. Some seemed manipulative. A few seemed heretical. After a long time of trying to sort through the nexus of faith and politics, I am finding this election cycle distinctively vexing and perplexing. How about you?

To address my vexed perplexity, I started reading a new book by Miraslov Volf and Ryan McAnnally-Linz. I confess that Dr. McAnnally-Linz was new to me, but I’ve admired Dr. Volf for many years. His experience as a political prisoner in Eastern Europe, an ordeal he survived with hope and joy intact, gives him lots of credibility, in my humble opinion. He knows a lot about grace.

Their new book is called Public Faith in Action. The two authors move through a number of key issues for our day, offering ethical questions for the reader to consider, suggesting ways that faith might inform these issues, gracefully recognizing that we as disciples live in a world marked by ambiguity. Noting that Jesus spoke of the kingdom of heaven, the authors suggest that the message of Jesus cannot be separated from our life in political community. We have a public faith. For that reason, I’m hoping their insights will help me make it to election day. We’ll see.

I was struck with one passage in particular. Authors describe the Civil Rights movement in the early 1960’s, specifically preparations for marchers in Birmingham in 1963. The Southern Christian Leadership organized training for marchers. In order to be permitted to be part of the march, each volunteer had to sign a “commitment card,” promising among other things to do the following:

In other words, according to the authors, “public engagement with Jesus Christ as the center and norm calls not only for commitment to following Christ, but also for the formation of a certain kind of character.”

This election season calls us to explore public faith in action. We could do worse than to follow the three steps on that commitment card. (I can pray that candidates for political office do the same. Is that a horizontal prayer?) What spiritual practices would be helpful to you, as you think about your public life? What would it mean to have our character as Christians who are also citizens, citizens who are also Jesus-followers, shaped by spiritual practices, backed by spiritual action, offered in a spirit of love?

What would you put on a commitment card?

But strive first for the kingdom of God and his righteousness, and all these things will be given to you as well.
-Matthew 6:33

Christian faith has an inalienable public dimension. Christians aren’t Christ followers just in their private and communal lives; they are Christ’s followers in the public and political lives as well. Christ must be the center and norm for Christian engagement because Christ and his Spirit are at work, not just in our hearts, families and churches, but also in our nations and the entire world.

"Jesus’ life and message are unmistakably public, even political, though not in the usual sense of the term. After all, the core of Jesus’ preaching is that “the kingdom of God has come near” (Matthew 4:17; Mark 1:15). Whatever else it might be, kingdom is surely a political term….The book of Revelation portrays the final advent of God’s reign as the “holy city, the new Jerusalem, coming down out of heaven from God” to be established on earth (Revelation 21:2). We get our word political from the Greek word for city."

This post first appeared on Jay Sidebotham’s August 1, 2016 Monday Matters blog and is reposted with permission of the author.