Since deadlines don't respect vacations, I've filed the August edition of my In Good Faith column from an undisclosed coffee shop somewhere in the world. I write about that thing that's on many of our minds this week -- the Olympics in Rio. Enjoy. If you can pull yourself away from the TV long enough to read it... 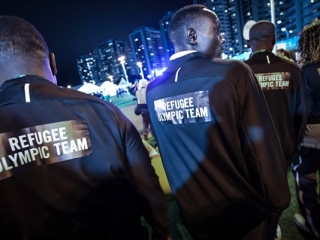 As I write this, the 2016 Olympic Games in Rio are in full swing. Like much of the world, I have tuned in to a few events so far — some biking and swimming and a touch of women’s soccer. Also, like much of the world, I lounged on the couch and stuffed my face with food as I watched these world-class athletes put their bodies to the test.

Sure, there’s a certain incongruity to it all. But then again, we’re Americans! We’re world champion armchair athletes who can eat heroic quantities of junk food while watching the fittest among us exert themselves. Thanksgiving Day has nothing on Super Bowl Sunday for sheer gluttony of spirit. And anyway, I’m sure there was no shortage of baklava as the ancient Greeks followed the flight of their heroes’ discus tosses.

But my point isn’t shame and guilt — there’s enough of that floating around the atmosphere. It’s the difficulty the average person has of relating to Olympic events. And I don’t just mean the obscure ones. Sure, most of us don't throw spears around for purposes of self-preservation. Thus the javelin toss seems an odd endeavor. We may have tried our hand at archery during summer camp when we were eleven, but chances are no one would accuse us of being a modern-day Robin Hood.

It’s the whole notion of elite-level competition that feels remote. Yes, we hear commentators wax eloquent about the purity of competition and the human spirit, but most of us are just trying to make it through the day. No one’s competing for prizes when it comes to getting dinner on the table or paying for this year’s family vacation or tending to an ailing parent. There’s no medal for walking the dog or calling a friend who seems depressed or taking a child with an ear infection to the hospital in the middle of the night.

Competition is, in many ways, a luxury item. Something we can do when all our other needs are being met. In suburbia, this might mean training for the local five-mile road race. Maybe this year, if we train really hard and get our speed work in up at the high school track, we can finally beat our next-door neighbor.

But for much of the world, competition simply means survival. It means finding enough food and clean water to keep loved ones alive. It means not being crushed by the economic and environmental effects of globalization. It means keeping one’s self and family safe from forces of terror and disease.

It’s the reason, whatever your country of origin, you can’t help but pull for the Refugee Olympic Team. These 10 individuals, talented athletes across several disciplines, were literally pulled from misery and given a chance to compete in Rio. Their presence doesn’t solve the larger global refugee crisis, but it does offer visibility to a difficult and untenable situation. It also puts a human face on the often faceless plight of this particular brand of global human suffering.

As the games go on, I encourage you to listen to their stories. Not just in the NBC, ratings-boost, feel-good way, but the stories that connect these athletes to the larger crisis of human pain and suffering. The ultimate goal isn’t athletic victory but the inspiration of hope.

You can always find the divine at work in this life if you open your heart and soul to the stories that lurk beneath the often over-produced surface. Even if you can’t relate to, or even name, the five events that comprise the “modern pentathlon.”

This post first appeared August 11, 2016 on Clergy Confidential and is republished with permission of the author.