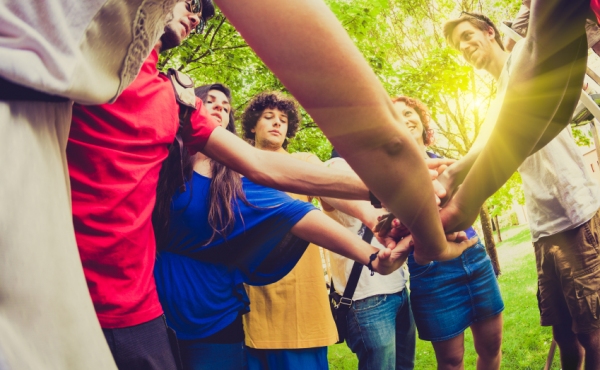 A member of the church brought in his confirmation bulletin to share with the priest. As he looked at it, he noticed an interesting addition. In the listing of clergy and staff members and congregational leadership, there was another line: the president of the Episcopal Young Churchmen. That’s right: the leader of the church’s youth group was listed (and in this case, leader meant the young person, not the paid or volunteer adult).

That spurred an idea. Last year, we had a faithful but small group of five youth who attended EYC (Episcopal Youth Community—or as it was known fifty years ago, Episcopal Young Churchmen). Our congregation has plenty of young people in middle and high school. By last count, about forty young women and men could attend. The faithful five enjoyed their time together but were frustrated. They wanted the group to grow.

Spurred by the notice in the old bulletin, the priest and the (very part-time) paid adult leader of the youth group gathered with the five young people for a couple of “youth council” meetings. The youth drove the agenda: What did they want EYC to be? And what were they willing to do to help get it there?

The youth council formed, elected leaders, set the calendar for the year, and brainstormed ideas. On their own initiative, they sent personal postcards to their forty peers, inviting them to the next gathering. At church on Sunday, one of the youth make an announcement during church but aimed directly at her classmates.

And on Wednesday? Eighteen young people came to the fall kick-off of EYC.

Tomorrow is the second meeting, so we’ll see whether there’s attrition or momentum. But for a moment, we’ll celebrate the victory of what happens when people are empowered to do ministry and not have it done on their behalf or to them. The notion that young people are the church of tomorrow is foolish and short-sighted. They are the church of today, just as the octogenarian and the Boomer, the Gen-X, the rare Millennial, toddlers, and infants.

If we trust them, if we imbue in them the confidence and conviction that they are important, that they are leaders, then we might experience renewal and change in all kinds of places. Even on the back of church bulletins.