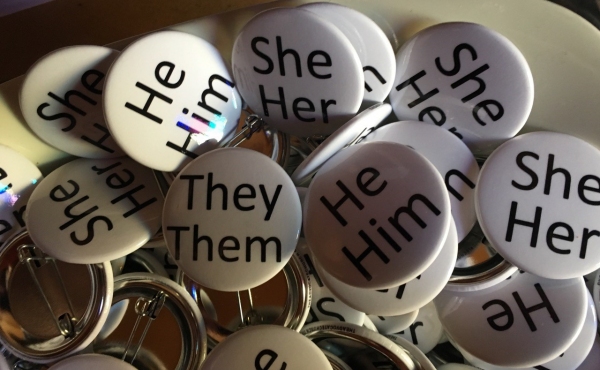 A member of the congregation asked if we might have pronoun buttons made for folks to wear in church -- simple pin buttons that would identify the pronouns with which people identify, such as he or she or they. Even though we don’t have non-binary or trans folks in the congregation (that we know of), Hannah explained, if any came to visit, they would likely feel more welcomed if they saw people wearing pronoun buttons. It would be a sign of hospitality. It would also help us all to be more aware of what gender identity is and how it varies. And it would cause us to be more mindful that we welcome all.

I knew the idea would be welcomed by many who truly want to broaden and make known our inclusive welcome. I was also aware that the idea would cause some to feel uncomfortable, or to question why it was necessary. And I had to confess my own ignorance of the nomenclature and terminology.

But it seems that those coming of age this side of the new millennium are increasingly comfortable with many forms of diversity and identity. So are many others who spend time with them. They are drawn to churches that encourage and embrace that diversity. Happily, the biblical narrative supports this.

As our Presiding Bishop, Michael Curry has said:

Genesis 1:26-27 teaches us that all human beings are created in the image and likeness of God. This is a divine declaration of the inherent sanctity, dignity and equality of every person. Further, the sanctity of every human person and the principle of human equality before God are deeply imbedded in the teachings of Jesus of Nazareth. In Mark 22:26 and Luke 13:10-17, Jesus teaches the inherent worth and dignity of the human person. In Matthew 5:43-38, he tells us of God’s love for all people equally. In Luke 10:25-37, he commands us to love God and to love every person. Above all, Jesus teaches that we are to treat all others as we ourselves would want to be treated (see Luke 6:31-36).

We took to the internet to look for examples of pronoun buttons, but we couldn’t find any of the size and simplicity that we were hoping for. So we went with a site that allowed us to design our own. We went with 1.5 inch rounds, 100 He/His, 100 She/Her, and 50 They/Their, and decided simply to put them in a bowl near the door, so that those who wanted, could choose to wear the button that identified their pronouns. We ordered more than we needed for ourselves in hopes that folks would take some to give away.

The Sunday after the buttons arrived, Hannah led a discussion for the congregation about gender identity. She called it Queer 101. Importantly, from the start she created an atmosphere of acceptance and patience. All questions, all confusions, all discomforts were welcomed, and she responded with kindness and compassion. Because, truth be told, many of these ideas are new and unfamiliar to many of us. And the nomenclature is confusing to many. Cis-gender, non-binary, queer, gender identification, sexual orientation…

Hannah was well-prepared, and she helped us to understand the many terms around sexuality and gender identity that we’ve been hearing or reading about. But more than terminology, she helped us to understand the humanity behind the labels. And we soon realized that turning away from understanding and welcoming those who may not conform to our traditional ideas of gender, was to turn away from human beings created in God’s image. Not an option really.

For those who wanted to learn more, to understand better, Hannah provided a list of resources, including:

All told, about ¼ of the congregation is now wearing the pronoun buttons. Enough to make us all more aware. Enough to allow a gender non-conforming visitor feel more welcome when they come. Enough to express what we believe and form what we become – the Body of Christ, given for the world, leading with love.