"This is my body broken, for you" 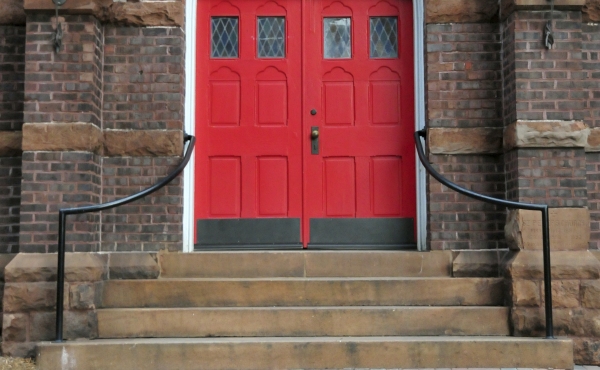 For over thirty years, The Episcopal Church was part of my self and soul. I was baptized as an infant with an Episcopal liturgy in a Methodist Church. I don't know how that happened either.

I’m one of those millennials. Sometimes it feels like we’re THE mystery the church must solve in order to not die. I think there are more important things to discuss, like how to follow Jesus. I used to love this slogan that dominated my childhood and young adult years: "The Episcopal Church Welcomes You." It was true because we said so, no question about it. The statement was dramatic - and innocent - enough to be fallibly infallible, and because we seemed to want to mean it. Years later, I realized I never questioned it because those who weren't universally welcome already knew not to come, and if I didn't see a problem, it didn't exist.

I grew up an abled child. I could acolyte because I could climb up two steps to reach the chancel where I could “Lift High the Cross” and light candles in the proper order. If I thought about those steps at all, they were a spiritual transition from holy to holier ground. I never considered that stairs could prevent someone from acolyting. There were no disabled people at church - not until my grandmother's mini-strokes left her fumbling over words and footsteps, leading her to use a wheelchair. But she was "old" and “her ministries were done,” we thought. We were sad when she stopped being a lector, but it was the natural order of things: lose your speech or legs and it’s time to quit your ministries.

As a young adult I became disabled by ankylosing spondylitis. Debilitating pain and stiffness immobilized and drained me of energy. I used a cane, became a sometimes-wheelchair-user, wore a brace to protect my hand during the Peace, and stood less often until I was sitting through services to reduce pain and conserve energy.

As a millennial, with years of ministry ahead of me, I noticed things I hadn't before. In many churches, accessibility ends at the altar rail. Anyone who can get in the door can receive communion, but only people who can get to the altar can do the work that happens there. Most chancels are raised, accessed only by steps. If a ramp or lift exists it may, oddly, reach everywhere but the altar.

Women were previously denied the priesthood in The Episcopal Church, yet before 1974 we could, for example, serve on altar guild and at least touch that holy table while adorning it. But, for many with disabilities, the barrier between us and the altar remains physically real even though the church canons state, "No one shall be denied rights, status or access to an equal place in the life, worship, & governance of this Church because of race, color, ethnic origin, national origin, marital status, sex, sexual orientation, gender identity & expression, disabilities or age...." (Canon I.17.5)

Barriers exist in the literal foundation(s) of worship spaces. People with certain disabilities who feel called to be (for example) a Eucharistic minister, verger, or priest are barred from considering those calls in many churches because of the sanctuary. New church buildings are not required to be universally accessible, nor is there evidence that the church requires existing buildings to make renovations. We with disabilities who speak up tend to be shushed and informed that our bodies are an inconvenience with responses like, “It’s too expensive,” or, “Can’t you do a different ministry?”

In the United States, many structures that restrict equal access to society were removed by the Americans with Disabilities Act (ADA) of 1990, but enough Christians with sway argued that it would breach the separation of church and state, and churches and religious entities were written out of the law, with some exceptions.

The Bible has been used to justify oppression and separation for centuries. However, we've learned that you do not remove a woman's gender in order for her to be a whole minister; or someone’s sexuality, gender identity, or race for them to be a whole minister; yet we maintain that the only way someone can be whole is by removing their disability. This sends a deeply harmful message to people with disabilities - that we cannot be whole unless we fit a definition of ‘body’ that isn’t ours. For many, removing our disabled identity would make us feel more fractured than before.

The Bible is used to inform our perspective of disability as less-than-whole because people preaching from the text are predominantly nondisabled people, often interpreting text in a way that unintentionally reinforces a separation between those who pray and those who are prayed-for, or those who are whole and those who aren’t. Even versions of the Prayers of the People maintain that divide: "We pray for the sick, the friendless, and the needy" (BCP) as if none of us doing the praying fall under those categories. This divide affects how we view our neighbors, approach our ministries, and build our churches.

When I realized that, as my mobility decreased, so would access to ministry opportunities, it hurt deeply - not because my body prevented me, but because the infrastructure of the church prevented me from those ministries. I am not one to keep quiet, so I turned my prayers into action. I read the Constitution and Canons. I became a Deputy to the 79[1] General Convention and drafted a resolution to review what we mean by "disability" and "disabled" in the Constitution and Canons (D048). I rolled myself ragged in my wheelchair for two weeks, back and forth across hot Texas asphalt, to request that ‘people with disabilities’ be listed in resolutions alongside other marginalized groups. Later, I explored the ordination process. What I found – or perhaps, what I did not find - deeply disturbed me.

Canon III.1.2 states: "No person shall be denied access to the discernment process for any ministry, lay or ordained, in this Church because of race, color, ethnic origin, national origin, sex, marital status, sexual orientation, gender identity & expression, disabilities or age…" This so-called nondiscrimination clause is present in two canons, yet we haven’t defined what "deny access" means. I have not found policies for how one might request accommodations for disability, for example. People in the ordination process also must complete a "medical and psychological evaluation by professionals approved by the Bishop, using forms prepared for the purpose by The Church Pension Fund, and if desired or necessary, psychiatric referral." (Canon III.6.5.j)

The medical evaluation asks questions including, “Have you received disability benefits or medical leave for any medical/psychiatric condition?” and “Have you lost time from work or school in the past three years for medical reasons?” Further, the evaluation prompts a physician to “List any abnormal findings after a rectal exam and stool sample.” The cover page of the form states, "By submitting to this examination, the candidate consents to the use of the information herein in connection with his/her candidacy."

(EDITING NOTE: The medical evaluation form I linked to above is through the Diocese of Northern CA website. I couldn’t locate either form through the CPF website.)

Our judgments of fitness for ordination are representative of the institution's views on who is worthy of call. These kinds of requests for information would never be lawful under the Americans with Disabilities Act. Yet, because The Episcopal Church has nothing more (not that I have found) than a nondiscrimination statement in the canons, we are left with an unenforceable regulation. What do we mean by “deny access”? How do we end discrimination and ableism in the Church and engage in theologically-grounded disability reconciliation and healing, seeking to restore our wholeness as an institution?

This restoration to wholeness was my reality as a permanently disabled Jesus-follower. This was the sort of liberation theology I preached just by existing: I am not confined to my disability, rather, it is my disability that liberates me. The Church needs deacons and lay ministers to lead from vulnerable bodies, and bishops and priests who can fully embody the broken Christ, saying, “This is my body broken, for you.”

As one of those token millennials, a group often reported as having little tolerance for institutions that are exclusive or hypocritical, I believe The Episcopal Church can gain credibility by making accessibility a priority and platform. We live in a world with growing chronic disease rates. People with disabilities populate nearly 20% of the United States and 10% of the world, Baby Boomers are aging, and healthcare is not a guarantee especially for young adults. This is the world millennials have inherited, and we are skeptical of institutions that are not aligned with justice for all. We want to identify with organizations that are morally sound, and that align with our penchant for diversity, not just tolerance.

If the institution says, “The Episcopal Church Welcomes You," the institution needs to make sure it can follow through on that. The Church must fix its overtly ableist structure if it wants to claim it welcomes anyone at all.

Note: This essay reflects my personal experience with physical disability, only. There are many types of disabilities, many more than I could possibly represent.