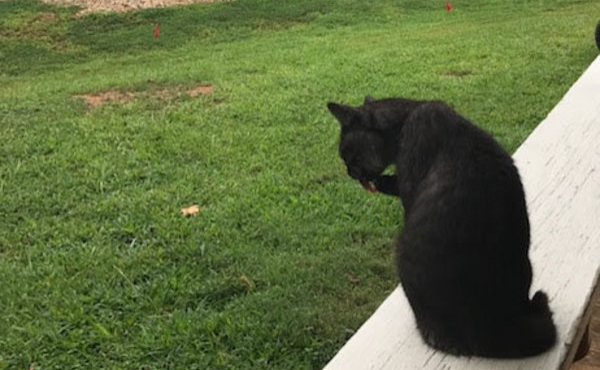 The resident in the church house was getting tired of cleaning up the mess left behind by field mice in the kitchen. She also wanted some company. So she asked if the church might get a cat. The altar guild was having similar challenges with mouse detritus in the sacristy and was ready to support the idea. With the altar guild on board, the vestry was quick to assent.

The resident and I started visiting the local animal rescue. We knew that any cat we adopted would need to be tolerant of kids, so once we narrowed the possibilities down to two or three, we invited a 5 and 9-year-old from the church to go with us. Each cat was given the kid test for playful interaction and kindness.

The result was Smoke, the Advo-cat. 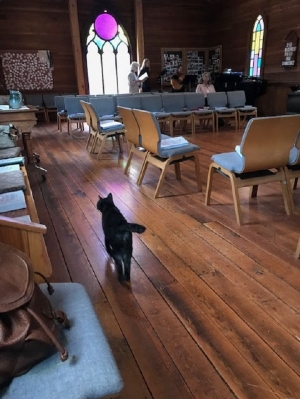 There is certainly a lot said about Episcopalians and their cats. Forward Movement’s Episco-cats calendar has been a big hit for years. And there are stories told about the way stray cats will connect with a church and stay on for years. Smoke achieved legendary status quickly. He was quirky, with a bent tail and scarred ears and a funny saunter to his walk. He had a way of targeting people in a particular state of strife – jumping onto the lap of a woman fearing a miscarriage or a newly widowed elder. Truth be told, Smoke also had a way of targeting the folks who were allergic to cats, jumping up on their laps, too. It wasn’t uncommon in a class or meeting for Smoke to walk from one lap to another, or to weave around chair legs and ankles, absorbing a gentle pat from one person after another.

Smoke’s first time in the worship was for a funeral of an elder who had died after years of dementia. The elder had been a real cat-lover in life, Smoke came in during the funeral and settled in front of the table where the ashes had been placed, to the delight of the family and friends who had gathered. 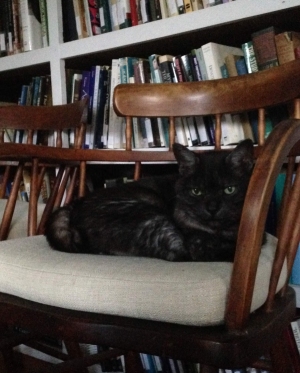 There were expenses, of course, vet bills and food and litter box provisions. It didn’t take long to realize that these should be charged to the hospitality line of the operating budget. Smoke was the church’s greeter. Pull up in the parking lot, and he would appear from somewhere under the church or nearby bush and come walking out to the car. Kids who were new to the community describe how Smoke was the first to make them feel welcomed and understood. When given an opportunity to name their church school class, the middle schoolers of the congregation went with Smoke’s Rangers.

As for the mice… Smoke was often seen at his post, back to the church, facing the nearby grasses, daring any mouse to come near. And yes, there were sometimes Sunday morning offerings left at the doorstep. Very effective he was. Smoke died this spring; a loss to our church community. We held a burial on the church grounds, near the grasses where Smoke had previously stared down the mice. We were grateful for the Episcopal Church’s Service at the Loss of a Beloved Animal. Prayers were prayed, stories were told, there was laughter and sorrow. One of God’s creatures had passed from our midst.