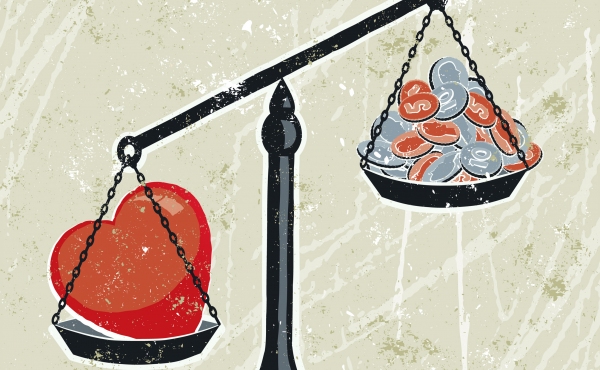 Sometimes a good idea comes in a pint of ice cream.

I live near Cincinnati where we put chili on our spaghetti and the hand-churned ice cream from Graeter’s reigns supreme. The regional company releases seasonal flavors and earlier this month began selling Elena’s Blueberry Pie. Except Blueberry only had one “e” on the front of the pint. Copy editors facepalm in unison.

I don’t know how many people reviewed the graphics for the pint container, but I suspect a bunch of people signed off. I can only imagine the stomach-dropping moment when the first person realized the company had printed—and already distributed—several thousand containers with a third-grade spelling error.

But here’s where the story takes an interesting turn. Instead of spending tens of thousands of dollars reprinting and replacing all the containers, the company announced that it would donate that same amount to a cancer research nonprofit The Cure Starts Now.

Often I wish corporations would emulate faith organizations about how to treat others. But here’s a time when we can take cues from a company. Imagine if we approached mistakes (our own and others) with the same humility and grace. Instead of casting blame, we looked for ways to find a positive resolution. Instead of sweeping a problem under the rug or burying our faces in shame, we owned up to the issue and presented a solution.

I’m part of a group called the Episcopal Communicators. These folks work in our churches, dioceses, and organizations, with the goal of sharing the story of our ministry, internally and externally. A lot of times, this is important but not glorious work: Preparing church bulletins and newsletters, updating websites, coordinating events. And the opportunity for error is huge. Next time you’re in church, look through your bulletin and think about how many things your church communicator has to pull together—everything from page numbers for hymns to the current scripture readings to the calendar of events and the announcements that come from all corners. Now add in the speed with which these need to be completed, starting on a Monday or Tuesday and ready for folding and distribution by Thursday or Friday. Frankly, it’s amazing those things aren’t riddled with error.

But I can’t tell you the number of times I’ve heard from communicators (or experienced myself) sharp criticism for a mistake—sometimes one as simple as a misspelled word. On a recent Facebook post on the Episcopal Communicators page, someone shared how a parishioner would take a pen each week, circle any mistakes, and deliver it with glee the next day.

And our haste to criticize isn’t limited to communicators. How often have we left the worship service, the final words to “Go forth in peace to love and serve the Lord” fresh on our tongues, and while shaking the priest’s hand, complained about an error of some sort?

We are people quick to cast blame and slow to extend grace. To be clear: I’m in that category too. It’s a great lament that I struggle with reveling in the 99 percent of things that go right. Perhaps you do too.

I am sure that the ice cream company conducted an internal investigation to figure out where things went wrong. It’s good and sound business practice to figure what part of their system needed a change so that this mistake wouldn’t happen again. This too is a lesson for us. We should not casually shrug off all errors and go on our merry way. It’s important to look at the system and figure out if something could be changed or fixed to avoid a repeat of the same problem. (Other mistakes will occur, of course. That’s the nature of mistakes).

But this company’s response offered an example of Christian charity—not just through their donation (though that was great) but in the way they modeled humility without shame. Yes, they said. We made a mistake. No, it’s not the end of the world. And we’ve come up with a way to make lemonade out of lemons, or in this case, delicious ice cream out of blueberries, with a dollop of generosity.

I don’t know about you, but I could use a couple of scoops of that.