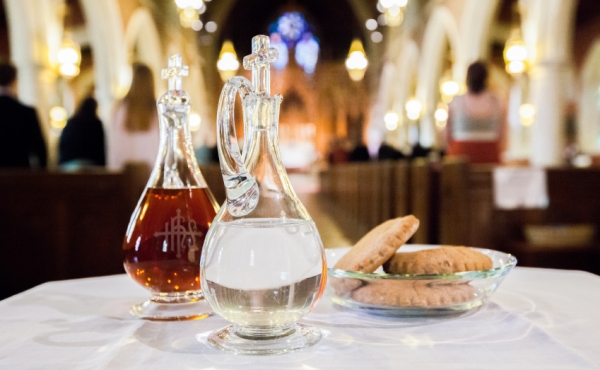 Whether you think it’s merely a fad or you know someone who has been severely affected by Celiac’s Disease, many Episcopal faith communities have made the decision to make certain accommodations for those who abstain from any food products made with gluten (wheat, barley, and rye). Though most coffee hours haven’t yet made the leap, many an Episcopal Eucharist boast they have gluten-free wafers upon request. Which is great. Sadly, though, the accommodations fall short.

Though I, myself, am gluten intolerant, I don’t feel ill if I ingest gluten. One of my daughters, on the other hand, has a severe gluten allergy and can get pretty sick. Consequently, Mama Bear pays attention. Since most of the internet traffic on gluten-free (GF) accommodations at churches were about how the Roman Catholic Church has banned gluten-free wafers (a non-wheat host is heretical in their eyes), I decided to share some best practices for our Episcopal friends who want to be truly hospitable to those with gluten allergies.

1. There’s no point in only offering GF wafers/bread and not having a gluten-free chalice. Cross contamination is real. Everyone who dips their regular wafer in the chalice has left behind traces of gluten for the potential person with an allergy to ingest. Not good. The best accommodation is to have a smaller chalice to use in that instance. Whether it’s kept on the altar or you have a special gluten-free station, it’s a delight to know that a few have already made that accommodation a part of their Eucharistic tradition.

2. Don’t put the GF wafers on the same paten as the regular wafers. See above for cross-contamination comments. Best practice is to have a separate paten altogether or have a pyx filled with only GF wafers.

3. Don’t serve the GF host to the recipient. Let them take it from the paten or the pyx themselves. Unless you have a designated station with a server who is only serving GF wafers, you run the risk of cross-contamination. This isn’t rude, rather it indicates that you care about them and are ensuring them that you aren’t going to make them sick.

4. Consider using only GF wafers for everyone. Nobody I know participates in the Eucharist because the bread or wafers are so delicious. No, GF wafers aren’t as good as regular wafers, yet they are completely fine. I don’t feel the urge to spit it out.

I know those who offer GF wafers are trying their best to be hospitable. It’s such a thoughtful accommodation. Yet, the above practices will actually ensure the safety of those who are truly allergic. That demographic is on the rise. Please share this with your priests so they can make the adjustments needed to be the thoughtful and intentionally hospitable community they mean to be.