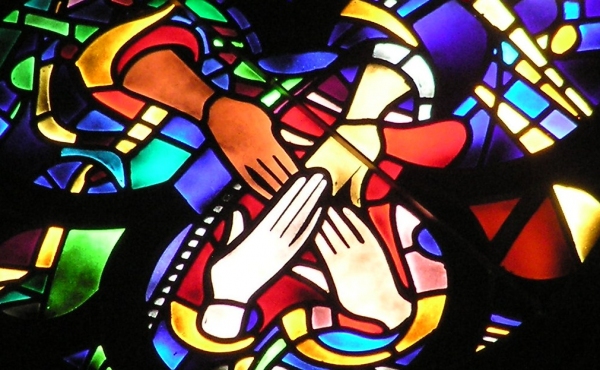 I’ve spent a great deal of my ministry in St. Mary’s County, Maryland – the southernmost tip of the Diocese of Washington – connecting with other leaders in other churches, especially other Episcopal churches. I’ve built collaborative networks with other church leaders and, indeed, churches. In time, we have built a truly collaborative business model – two parishes becoming one parish (merging), something beyond the obvious limitations of the ‘one parish, one priest’ model.

This has been good work. Also, it’s essential work. Anyone who’s served on a vestry in, say, the past fifty years, or any clergy leader in The Episcopal Church today knows how essential this work is. There really is no other way we can keep open, let alone encourage every single Episcopal congregation to thrive unless we work together and find new, more sustainable business models.

That’s the straightforward message, and a message I’ve been crafting and working toward for more than a decade in ministry.

Collaboration is a solid business plan, but setting up a new business model needs to also come alongside a good, hard look at the core life and nature of a given congregation. Turns out, if one feels called – ‘compelled’ is my word – to build something collaborative one will, by definition, run into that “core life and nature…” bit. That is to say, some people in our congregations believe very much in the ‘one parish, one priest’ model. They may not know it, and they may not be able to articulate their belief as such, but try to take some of those things away, try to un-do that stand-alone business model and you’ll quickly find you’re not talking about dollars and cents but, rather, identity, meaning, purpose, history, existence.

St. George’s in Valley Lee and Ascension in Lexington Park – the two congregations I serve as rector, two parishes merging (we trust) into one new parish – have taken a hit, so to speak. We’ve had to say goodbye to people who felt the need to walk away, some of whom have been generous givers and meaningful contributors to the life and ministry of these congregations. We’ve seen total pledge and plate giving decrease, but by working together, creating a shared budget and sharing as many resources as we can we’ve also seen an increase in what feels like the church’s core capacity. Years ago, just looking at the numbers, I knew that each congregation would not be able to overcome what felt like significant hurdles, truly structural deficits. We had all the makings and practices of short-term, crisis planning – stewardship practices that maintained the status quo, cutting expenses here and there, ignoring rising fixed costs of utilities and insurance and payroll. Ascension and St. George’s, acting alone, did not have the internal capacity or membership or, for that matter, zeal to grow by leaps and bounds. Simply put, we weren’t going to get there, alone.

But numbers are just numbers. The reality behind numbers is, of course, people – women and men who have perspectives and worldviews and, yes, ‘sacred cows.’ We’re talking about hearts and minds, and what we continue to find, year after year as we move forward into greater collaboration, is that we need to be more bold in calling people to a new way of seeing the church’s place in the world, and how they can participate in something new. That is where Ascension and St. George’s are, at present, and it’s taken good, hard, sustained work to get us here. I’m not sure I could’ve written the script for this play any other way. I’m not sure we could’ve gotten to these hard truths without having to learn them ourselves, by trial and error, by confronting loss and looking toward God’s real hope for his church.

And that’s where we stand, Ascension in Lexington Park and St. George’s in Valley Lee, as we get ready to go to our diocesan Convention in the new year and make our initial request to merge, to become one new parish. And that is the kind of energy and vision we are investing in – that which is new. What is the vision toward which God is calling us? What is the church God would have us be and become? What is God’s preferred future for his church, and for these congregations who are members of that larger body? What’s the “more…” we’re seeking? We’ve learned and, now, we know that it’s more than a functional business model, more than dollar and cents and Average Sunday Attendance. We know that it’s always been more.