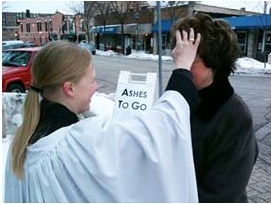 Priests in Chicago took to the streets yesterday.

For the second year, congregations in the Diocese of Chicago took to the streets on Ash Wednesday, bring the rite of imposition of ashes to the streets, coffee houses, and transit stations.

The diocesan-wide initiative, known as Ashes to Go, was conceived by the Rev. Emily Mellot, rector of Calvary Episcopal Church in Lombard in response to church members regrets about not being able to attend Ash Wednesday services at the church citing work or other commitments. It struck her that the church ought to be taking the Ash Wednesday rite to where the people were at 7:00 am, the commuter rail stations.

So last year she floated the idea before her parish’s vestry, thinking it would be a project for another year. But the vestry was so taken with the notion “that we were at the Metra station with ashes, poster, handouts and volunteers nine days later.”

Reflecting on yesterday’s efforts, diocesan communications director David Skidmore said, “Our Ashes to Go initiative pretty much took center stage in media coverage in the Chicago area, leaving our RC friends somewhere off stage right, the first time that has happened on a major liturgical day in a long while. Four TV stations, two major dailies, and radio. Our folks were surprised and elated, the media were surprised, and the people on the streets were surprised and delighted.”

Postings on the Diocese of Chicago’s Facebook page tell the story:

Thursday, 1:00 am Thanks to all the clergy and lay people who braved the rain and mist to participate in Ashes to Go. We had a lot of media coverage (check out The Daily Herald photo gallery) but more important were the willingness, the eagerness, of people on the byways to receive the gift of ashes. A small tribute to this effort is on our main website home page.

Wednesday, 5:00 pm The public appreciated our Ashes to Go initiative. Reports so far from Arlington Heights, the Northwest Side, Northwestern University, Lombard, Winnetka and here at St. James Commons are all positive. People were surprised and grateful. Media response has been good: Chicago Tribune, The Daily Herald, CBS 2, ABC 7 and WBBM 780 have all reported on this work of the church in the world.

Wednesday, 11:00 am Despite the rain and drizzle, a lot of commuters took the time to receive the imposition of ashes around the Chicago area. At the Norwood Park Metra stop, Deacon Scott Elliot and a member of St. Alban's had over two-dozen people receive ashes, and at the Irving Park Metra and Blue Line stops the Rev. Kara Wagner Sherer and Jess Elfring of St. John's imposed ashes on around 50 people. At St. James Commons four people drove up to the curb for ashes from Bishop Lee.

Tuesday, 3:38 pm Our news release on Ashes to Go left out the Waukegan and Gurnee congregations' outreach at the Waukegan Metra station at 95 N. Spring St. Members of Annunciation of Our Lady and Christ Church will be there from 6:30 am to 8:30 am. The were included in the Ashes to Go schedule.

Monday, 8:48 pm Dan Puchalla, the communication and administration associate at St. Paul and the Redeemer, Chicago has created a clever video on the beliefs, practices, historic tidbits, and quirky customs associated with Shrove Tuesday and Ash Wednesday, the first of a lenten series to be posted on the SPR website. Very amusing, captivating and illuminating.

Does your congregation have an Ash Wednesday story to share? Readers are invited to share their stories and resources in the Your Turn section of ECF Vital Practices, or in the Comment space below.