The Church in Spanish 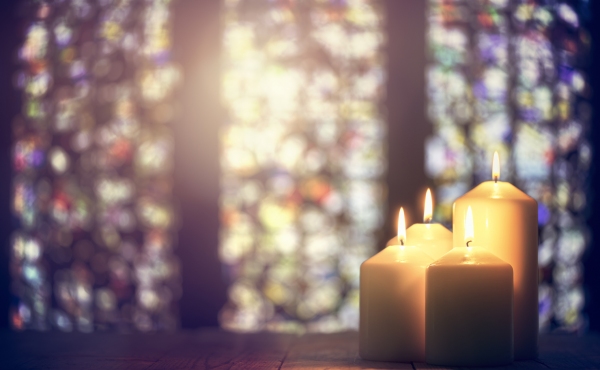 As a girl, I went to church in Mexico with my mother and my older sister. The mass was in Spanish and on the border between Arizona, USA, and Sonora, Mexico. Some years later, we began attending church in the U.S. and my father and middle sister would go with us. That mass was in English, and although I knew some other kids in that church because we went to school together, the English language was hard for me in church. I was brought up in the U.S. and all my schooling has been in English, but with God, my language is Spanish.

When I went to college in the Northeastern U.S., I sought out opportunities to listen to Spanish. I sat at the Spanish table at lunch time, on Thursday evenings I attended the Latina group, where a lot of us spoke Spanish, and I listened to music in Spanish at home. When my partner and I decided to get married in the Northeast after I completed college, the process got complicated because we had both been brought up in the Spanish-language church in Mexico and the western U.S. God provided us with a clergyman who spoke and sang in English and Spanish at my college! He was a clergyman from the Episcopal Church, and he was the one who presided at our wedding. We even sang “De Colores” during our marriage service! It was so great!

Our daughter was born two years later, and we finally decided to find a church for our little family. We attended our first service after our own wedding at the Episcopal Church on September 22, 1996. Our daughter was three months old at the time. 25 years have gone by since then. During those 25 years, my life has been enriched as if it were a dream. Not everything turns out perfect, of course, but I have a lot to be thankful to God for. Today our daughter is 25 years old, and our son will turn 21 in October.

In August 1999, we attender our first service in Spanish at the Episcopal Church of San Pablo in Phoenix, Arizona. This is a congregation that has services only in Spanish. There I heard the prayers of my childhood. The music in Spanish spoke to my spirit. Back then, San Pablo met in a small, old church. It was more like a chapel and had no air conditioning. The warmth was natural—and more so with the Holy Spirit.

Our second Spanish-language church was the Episcopal Church of San Mateo in Chandler, Arizona. During the year 2001, they held services in Spanish and English. Today their services are only in English. In San Mateo, we found ourselves, for the first time, in the situation where San Mateo was Saint Matthew’s younger sibling. There was not a lot of diversity in either of the services, and you didn’t see English-speakers and Spanish-speakers together on Sundays. All decisions for the congregation were made by the English-speakers.

In 2007, we moved to San Diego, where I began working as Child, Youth and Family minister in the San Pablo Episcopal Cathedral. There you would also see services in Spanish and services in English. And there also, people didn’t get together on Sundays. I had the good fortune to serve in that ministry, because I knew that the children and teens who attended services in Spanish also spoke English. The barrier that could have existed between adults who spoke only English or only Spanish and the children and teens was not a problem, because they were all going to school in San Diego and they spoke English. This made it possible to bring the groups together and have them share during camping trips. We provided leaders who spoke both English and Spanish so that there could be communication with the kids’ family members during the trips. The camping trips were a great success during my two years in that ministry. When the money for my position ran out, the church decided to split the work among three people, and unfortunately, that ended the sharing among the young people.

It’s people who speak both English and Spanish who can help our next generation share with people from “the other services.” God asks us to care for our neighbor. This is a way to start integrating our congregations that speak two different languages