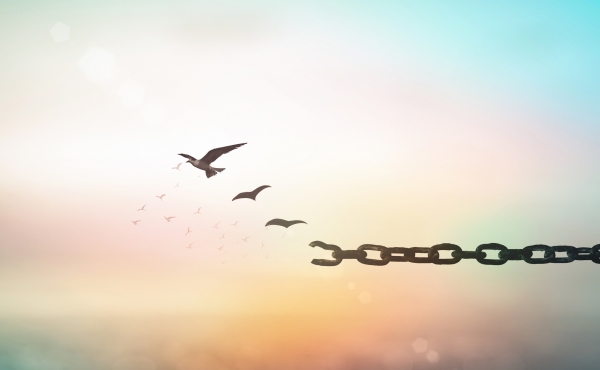 One year ago, we watched in horror as George Floyd was murdered, those images still scarred in our memories, captured by a strong, faithful witness. We had been in pandemic lockdown for so long, so much festering and boiling over. Then face-to-face with a veritable series of pandemics – deep systemic injustice, especially around issues of race in our nation, and Covid-19, as well.

The Episcopal Church will mark and mourn this anniversary, and rightly so. Our church stood, then, and stands up, now, against “the spiritual forces of wickedness that rebel against God” and “the evil powers of this world which corrupt and destroy the creatures of God.” The Episcopal Church, shaped as we’ve been these past several generations by the words of the baptismal covenant, not only knows the words by heart but carries them into the public square. Of this, I am proud to be an Episcopalian: striving for justice and peace among all people, respecting the dignity of every human person.

So let’s talk about justice. In fact, I want to talk about becoming a just church. Not only in our outward facing life, what we bring into the public square, but our internal common life. It’s time for The Episcopal Church or, I should say, every diocese in the church – for so much of our internal corporate life is, properly, managed and coordinated at the diocesan level – to become communities of justice: raising up right relationships between God, neighbor, and self, in fact actively righting those relationships which have been maligned.

Here are several thoughts, the start of my theses (not 95, mind you).

First, how can we say we’re a just church when we allow market economics to determine the fate of our local congregations and communities of faith? In general, congregations in less wealthy, less resourced communities are on the chopping block. Congregations in upwardly mobile, wealthy communities thrive and survive. How will the world know we are a church committed to right relationships when The Episcopal Church pulls out of poor, economically challenged, distressed neighborhoods year after year after year?

The institutional answer, of course, is: “… we don’t pull out of those communities; our polity doesn’t work that way.” That’s an excuse; not an answer. It is what it is, or at least it is what it appears to the outside world to be. Own it, church. And change it if you’re bold enough.

Second, how can we say we’re a just church when we allow our same worship of the Darwinian, survival-of-the-fittest, trickle-down economic model to cut off the livelihood, or so dramatically reduce potential funding opportunities for clergy to serve in congregations other than those in upwardly mobile, wealthy communities? This, more than anything, clearly impacts compensation inequity among women clergy and clergy of color. The same, tired institutional answer would be raised at this point about our polity: “…we don’t work that way in The Episcopal Church” thinking. But, sadly, those who value such rabid independence are generally those who actively benefit from the status quo. Local dioceses should not only establish clear standards for clergy compensation – which many have – and make those standards commensurate with particular jobs. But local dioceses should put ‘skin in the game’, as it were, and come up with funding models and more centralized compensation solutions which would level the playing field and right relationships.

Third, how can we say we’re a just church when we don’t actively incentive developing new ministries among those persons and communities who have been systemically undervalued and altogether marginalized? I’m not talking about ‘outreach’ ministries (oh, how I loathe that term, ‘outreach’: keeping ‘them’ out and letting ‘us’ feel better about ourselves). I’m talking about relationship building and community engagement, where we (the institutional church) don’t move forward with preconceived solutions to ‘their’ problems but, instead, move with a listening ear where we can meet those who have been marginalized, hear their needs and hurts and hopes, and align our resources with their capacity in such a way that leads to honest-to-God neighborhood transformation.

Our congregationalist polity stuck within a catholic ecclesiology continues to muddle the situation, such that local clergy and vestries are often beholden to the needs and whims of their congregation – regardless of whether that congregation is representative of its neighborhood or present reality. I can’t tell you how many clergy colleagues have dreamed with me about doing something, ramping up ministry with people they want to reach, but that dream comes crashing down, often in the very moment when the clergyperson is caught up in the daydream: “Oh, my people would never support that,” she will say, quickly adding: “…and they’re the ones who pay my salary, don’t you know?”

I hasten to add, at this point, that The Episcopal Church is doing a brilliant job of incentivizing entrepreneurial work through its New Episcopal Community grants and church planting initiatives. I know this because one of the churches I serve, Church of the Ascension in Lexington Park, Maryland, applied for and received a TEC grant to discern the creation of a New Episcopal Community – a new Christian, Episcopal community specifically geared to serving and engaging the poor and the working poor who live in my neighborhood.

These are just three ‘theses’, and the list could go on. The list probably will continue going on in my mind, as this is something that deeply troubles me: our shocking inability to line up The Episcopal Church’s internal common life with our outward-facing value statements. But, more than being troubled, I see these as achievable steps, ready-made actionable items wherein every diocese or, at least, those dioceses in The Episcopal Church who want to be known for justice could show by their common life what they attempt to profess through public statements.

I look forward to The Episcopal Church becoming a truly just church, 6,000+ communities of justice and right relationships: not just in word but in deed. You and I both know that the world to which we think we’re preaching isn’t always paying attention. I’d dare say that that is to some degree – greater or lesser, you choose – because we don’t practice what we preach.